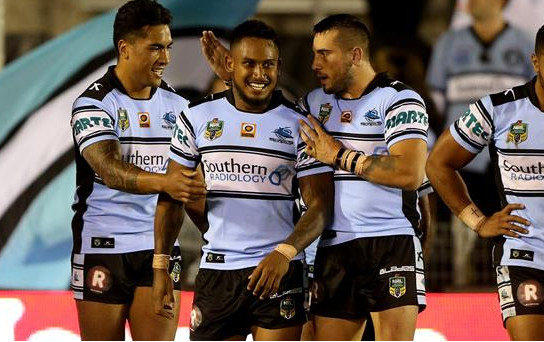 Sydney: The Cronulla Sharks ended the unbeaten run of the Melbourne Storm in Australia's National Rugby League on Monday, taking the fourth round match 14-6.

The Sharks had not won against the Melbourne team since 2012, and were two points behind at half time.

But they took control of the second half, particularly after the Storm's Will Chambers was sent off for a professional foul on an opponent, reducing Melbourne to 12 men.

In other matches on Monday, the New Zealand Warriors beat the Newcastle Knights 40-18, running in seven tries to end their 11-game losing streak.

While the Wests Tigers failed to get on the scoreboard against the Parramatta Eels, going down 8-nil.

In Sunday's match, the St George Illawarra Dragons pipped the Penrith Panthers 14-12 thanks to a late try by Josh Dugan.

In games earlier this Easter holiday weekend, the Gold Coast Titans, who were trailing the Canberra Raiders 20-6 late in the second half, were able to come from behind to win 24-20 on Saturday.

While the Sydney Roosters were unable to stop their loss to the Manly Warringah Sea Eagles, losing 20 to 22. The Roosters now languish on the bottom of the ladder, winless so far this season.

In a Queenland derby on Friday, the Brisbane Broncos edged out the North Queensland Cowboys 21-20. In Friday's other game, the South Sydney Rabbitohs were comprehensively beaten by the Canterbury Bulldogs 42-12.