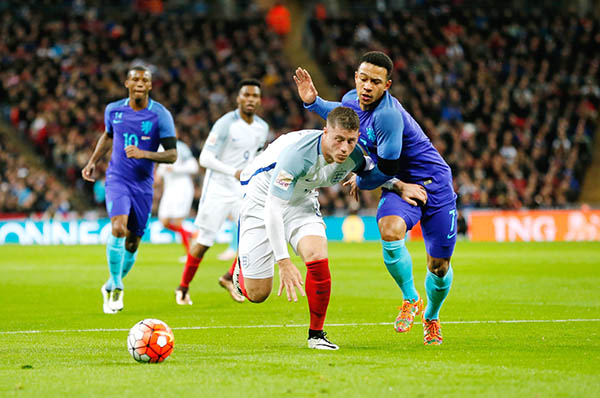 England’s Ross Barkley, left, competes for the ball with The Netherlands’ Memphis Depay

LONDON: An untried England team lost 2-1 to the Netherlands in a largely lacklustre friendly international at Wembley last night with the Dutch sealing victory thanks to a controversial winner from substitute Luciano Narsingh.

He cracked the ball home in the 77th minute after Vincent Janssen appeared to shove Phil Jagielka over in the build-up and although the referee waved play on, the England players strongly contested his decision.

England, continuing their build-up to this year’s European championship made eight changes from the starting line-up that beat world champions Germany 3-2 on Saturday and went ahead after 41 minutes when Jamie Vardy finished off the best attacking move of the first half with a close-range shot.

The Dutch, who failed to qualify for the tournament in France, equalised in the 50th minute when Janssen lashed a penalty into the roof of the net after defender Danny Rose handled.

In Munich, Mario Goetze scored on his international comeback to help Germany beat Italy 4-1 for the first time in more than 20 years.

Goetze, who had only played 53 minutes for Bayern Munich since a groin injury sustained against Ireland on Oct. 8, headed Germany’s second goal before the break after Toni Kroos opened the scoring.

Goetze was also involved in the third before the hour-mark, setting Julian Draxler free to cross for Jonas Hector’s first international goal.

Mesut Ozil made it 4-0 in the 75th with a penalty conceded by Italian goalkeeper Gianluigi Buffon.

Sweden, buoyed by the return of captain Zlatan Ibrahimovic, drew 1-1 with the Czech Republic.

Sweden took the lead in the 14th minute when Marcus Berg converted a cross with a first-time effort past Czech goalkeeper Tomas Vaclik.

The Czechs levelled in the 26th minute through Matej Vydra’s diving header.