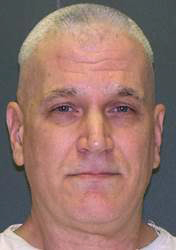 This undated handout photo provided by the Texas Department of Criminal Justice shows John David Battaglia. Enraged over his ex-wife going to police about his repeated harassment and likely arrest, Battaglia used a May 2001 visit with their two young daughters to avenge his anger. As their mother helplessly listened on the phone to one of the girls’ cries, he fatally shot them both at his Dallas apartment. (AP Photo)

Huntsville, Texas: Attorneys say a 60-year-old former accountant deserves a fair hearing to determine if he's competent to be executed for gunning down his two young daughters in Dallas while his ex-wife — their mother — listened helplessly on the phone.

John David Battaglia was set for lethal injection Wednesday evening for the May 2001 shooting deaths of his daughters, Faith, 9, and Liberty, 6, in his apartment. He'd be the 10th convicted killer executed in the U.S. this year, the sixth in Texas.

Authorities said the slayings were revenge for his former wife's complaints to his probation officer that led to an arrest warrant issued for him.

An attorney seeking to represent Battaglia has asked federal courts, including the U.S. Supreme Court, for a reprieve so Battaglia's mental competency for execution could be further reviewed. The Supreme Court has ruled a prisoner can be executed if he's aware of his pending execution and understands why he's being put to death.

"This situation is morally bankrupt and violates basic notions of fairness in our capital punishment system," attorney Gregory Gardner told the high court, which in January refused to review his case.

But Erich Dryden, an assistant Texas attorney general, told the justices the last-day appeals were improper, without merit and "a fishing expedition."

Around Easter 2001, he called Pearle, swearing at her and calling her names, a violation of his probation. She reported the incident to his probation officer and Battaglia learned on May 2, 2001, that an arrest warrant had been issued. That evening, Pearle left their daughters with him for a planned dinner.

Evidence showed Faith was shot three times, and Liberty five. A semiautomatic pistol found near the kitchen door was among more than a dozen firearms recovered from Battaglia's apartment. Hours later, Battaglia was arrested leaving a tattoo shop where he had two large red roses inked on his left arm to commemorate his daughters.

"I don't feel like I killed them," Battaglia told The Dallas Morning News in 2014. "I am a little bit in the blank about what happened." He referred to them as his "best little friends." He declined to speak with The Associated Press as his execution date neared.

Battaglia's trial attorneys called no witnesses during the guilt-innocence portion of his capital murder trial in 2002, and a Dallas County jury deliberated only 19 minutes before convicting him. During the punishment phase, jurors heard defence testimony that Battaglia's mental illness should convince them a life prison sentence would be appropriate. They did not agree.

The lead prosecutor at the trial, Howard Blackmon, recalled Battaglia as "uniquely sinister."

"This guy was so controlling, so vindictive to have murdered his own flesh and blood, his little girls, just out of spite," he said last week. Testimony at Battaglia's trial also showed he'd been violent with his first wife, who obtained a protective order that he ignored.