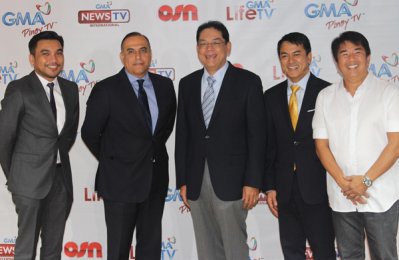 OSN, a leading pay-TV network in Middle East and North Africa (Mena) region, has increased the breadth of content for OSN Pinoy subscribers with the roll out of six new channels taking the overall number of OSN Pinoy channels to 15.
The channels offer the best shows, programmes and movies directly from the Philippines to the GCC’s large Filipino community, said a statement.
The additional channels make OSN the pay-TV platform with the largest number of Filipino channels outside of the Philippines, and the only platform in the region with the biggest networks in one package, it said.
The six new channels come from three of the biggest names in entertainment in the Philippines: ABS-CBN, Viva Entertainment and GMA Network.
GMA offers three channels, further strengthening its presence in the MENA region by providing Filipinos wider access to their favourite Kapuso programmes on its flagship international channel, GMA Pinoy TV the Filipino lifestyle channel; GMA Life TV; and the international news channel, GMA News TV International.
Select Kapuso programmes are also available online through any internet-enabled device via OSN Play.
Offering variety, the three other channels include the ABS-CBN operated Lifestyle Network Channel; action film channel CineMo; plus Viva Entertainment’s flagship movie channel Pinoy Box Office (PBO) which offers the best in Filipino blockbusters and classic films, will also be available to live stream on OSN Play.
Arnie Garcia, ABS-CBN Middle East managing director, said: “We are pleased to offer two new channels, Lifestyle Network and CineMo, to cater to the varied TV entertainment needs of Filipinos in the region. The addition of these two new world-class channels strengthens the existing channel line-up of TFC on OSN giving viewers the widest choice of Filipino content in the region.”
Gilberto R Duavit, Jr, GMA Network president and chief operating officer, said that through the renewed partnership, GMA programmes will become even more widely available across the Mena region.
“We look forward to becoming more accessible to our kababayan in the Middle East. If you look at the other channels that we will be offered with, it is a very unique opportunity and position. OSN is the definitive destination for the Filipino community, who get additional value through the exceptional bouquet of HD channels that we have on our network,” he said.
Emad Morcos, senior vice president- Media Partners, Affiliate Channels and Digital, OSN, said: “The addition of the six new channels further strengthens the choice that we offer the Filipino community in the region, making OSN the best network for premium and exclusive content.
"This builds on the introduction of several new channels on OSN this year, adding to the diversity of world-class programming that we offer to our subscribers. We will endeavour to ensure our offering remains as extensive as possible which means pushing boundaries to deliver for all our customers.”
The six new channels include CineMo, Lifestyle Network, GMA Pinoy TV, GMA Life TV, GMA News TV and PBO.
OSN subscribers can access all 15 OSN Pinoy channels including the six new channels and 42 Western channels by upgrading to the ‘OSN Pinoy Plus Extra’ package, the statement added. - TradeArabia News Service