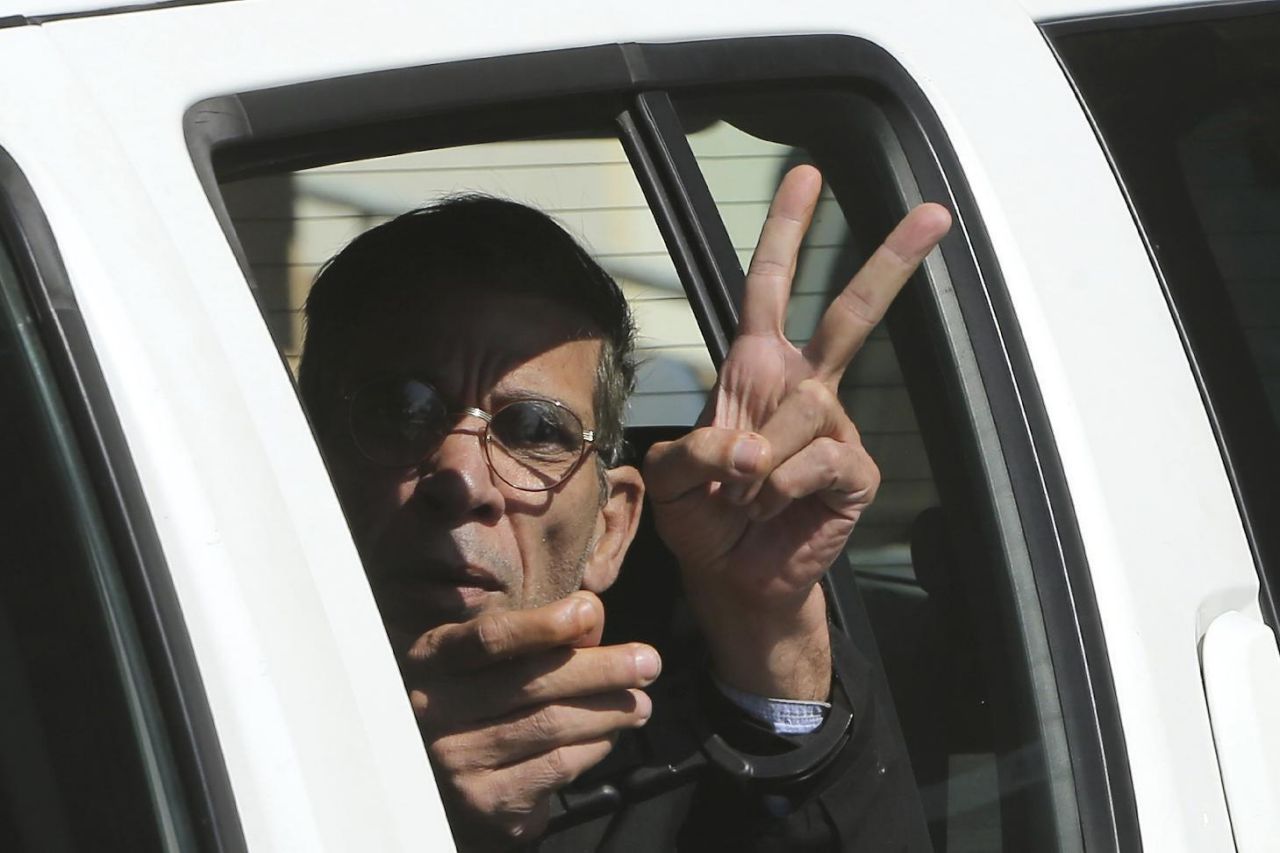 EgyptAir plane hijacking suspect Seif Eddin Mustafa flashes the victory sign as he leaves a court in a police car after a remand hearing as authorities investigate him on charges including hijacking, illegal possession of explosives and abduction in the Cypriot coastal town of Larnaca, Wednesday, March 30, 2016. (AP Photo)

Larnaca, Cyprus: A court on Wednesday ordered an Egyptian man detained for eight days after authorities said he admitted hijacking a domestic EgyptAir flight and diverting it to the Mediterranean island of Cyprus by threatening to blow it up with a fake explosives belt.

Judge Maria Loizou said she found the police request for the maximum eight-day detention necessary because of fears the suspect might flee and the fact that he admitted to the hijacking in a voluntary statement to police.

Tuesday's drama, which started when authorities said Mustafa claimed to have explosives and forced the flight from Alexandria to Cairo to land in Cyprus, ended peacefully about six hours later. Most of the 72 passengers and crew aboard the Airbus A320 were released soon after the plane landed, though a handful were held for longer. All were let go before Mustafa surrendered.

Lambrianou said that after Mustafa was arrested, he told police: "What's someone supposed to do when he hasn't seen his wife and children in 24 years and the Egyptian government won't let him?"

An official at the general prosecutor's office in Egypt, speaking on condition of anonymity because he was not authorised to speak to the press, said there was no travel ban on Mustafa. Egypt's interior ministry said he had a long criminal record but had finished serving a one-year prison term in March 2015.

After the hearing on Wednesday, a handcuffed Mustafa flashed the "V" for victory sign out the window of a police vehicle as he was driven away from the Larnaca court house.

Cypriot officials had described Mustafa as "psychologically unstable" following a bizarre set of demands he made to police negotiators, including what Lambrianou said was a letter he wanted delivered to his Cypriot ex-wife in which he demanded the release of 63 dissident women imprisoned in Egypt.

Lambrianou said that 15 minutes into flight MS181, which should have taken just 30 minutes, Mustafa demanded that the aircraft be diverted to an airport in Greece, Turkey or Cyprus. Despite an initial refusal from Cypriot authorities, the plane eventually landed in Larnaca after the pilots warned of low fuel.

The police prosecutor said witnesses saw Mustafa wearing a white belt with pockets that had cylindrical objects stuffed inside. Wire protruding from the cylinders led to what appeared to be a "push button" detonator he held in his hand.

Among those held was Ben Innes, a British man pictured in a photo with Mustafa that quickly made the rounds on social media.

Innes told The Sun newspaper he wanted to take "the selfie of a lifetime" while the incident was unfolding. The photo, taken by a member of the cabin crew and shared on social media by people who know him, shows him posing next to Mustafa, who has his jacket open to reveal the fake explosive belt.

"I figured if his bomb was real I'd nothing to lose anyway," Innes, 26, told the newspaper in a story published Wednesday. He told The Sun he had been texting his mother throughout the ordeal.

Mustafa had threatened to detonate the belt if police attempted to "neutralise" him, Lambrianou said, but he eventually gave up after the crew and passengers were released.

The prosecutor said Cypriot authorities will ask for help from Interpol to determine how the suspect managed to get the fake explosives belt through airport security in Egypt.