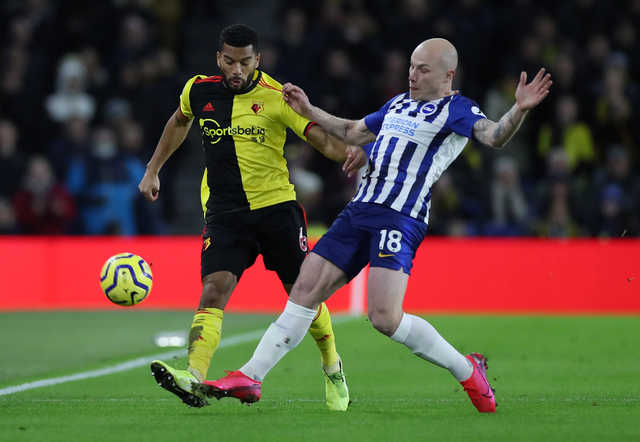 A bizarre own goal from Watford's Adrian Mariappa allowed relegation rivals Brighton & Hove Albion to take a precious point in a 1-1 draw at the Amex Stadium that left both sides facing a continued struggle to stay in the Premier League.

With the visitors apparently heading for victory, Brighton substitute Alireza Jahanbakhsh drilled the ball across goal but, under no pressure, Mariappa fired past his own keeper on 78 minutes.

The home side, who have not won this year, could hardly believe their luck after seldom threatening - or even mustering a shot on goal.

Abdoulaye Doucoure gave Watford the lead on 19 minutes after Aaron Mooy's ambitious through ball forward rebounded into his path. The Frenchman sped forward to the area, firing an unstoppable shot into the top right corner of the Brighton net.

It was Doucoure's third goal in six league games -- as many as in his previous 34. Brighton squandered promising first-half chances with Mooy and Leandro Trossard firing high, and lacked the creativity to unsettle the visitors' massed defence.

Brighton brought on top scorer Neil Maupay for Dan Burn at the start of the second half and later turned to overhead-kick specialist Jahanbakhsh, who eventually made an unexpected difference.

The goal kept Watford in the relegation zone on 24 points, three adrift of 15th-placed Brighton. Both teams now have a two-week winter break.

Watford keeper Ben Foster said: "The way the goal went in was very disappointing. Maps (Mariappa) is not trying to score an own goal, but that's football. It can go against you sometimes.

"The way we dropped back is a symptom of where we are in the league. We tried to defend what we had and thought we could weather the storm."