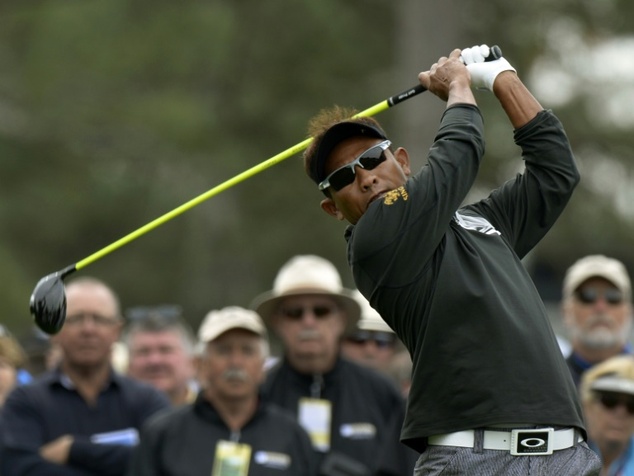 Thailand's Thongchai Jaidee during a practice round at the Masters in Augusta on April 8, 2014 ©Timothy A. Clary (AFP Photo)

Hong Kong :Evergreen Thongchai Jaidee believes he can conquer the game's young tyros and become Asia's first US Masters winner at Augusta next week -- at the age of 46.

All the talk before the year's first Major, which begins at Augusta National on April 7, has been about 22-year-old defending champion Jordan Spieth, 28-year-old world number one Jason Day and four-time Major winner Rory McIlroy, 26, the world number three.

But the Thai is coming off his most successful season in 2015, which saw him rise to a career-high 28th in the world.

At more than double Spieth's age, Thongchai says he's not showing up merely to make up the numbers -- he wants to take the winner's famous green jacket from the twenty-something brigade.

"Why not? For me I will try to win. I know it's difficult but you need to have targets," said Thongchai in an Asian Tour release issued Thursday.

"When I get there, my goal will be to win. Previously, I would just be looking at making the cut.

"Now, my target is to win the tournament... not just the Masters but in every tournament that I play in."

Thongchai finished 37th and 55th the last two years at Augusta and says he is now ready to make the breakthrough, with his advancing years giving him an edge in experience.

"Last year, I played good and this year I think I will have more experience," he said.

"I know about the pin positions, I remember every hole at Augusta National. I know where to miss it and where you can't miss it."

He also recognised the talent of the new breed taking the world of golf by storm.

"The new players are very, very good," acknowledged Thongchai. "They have the right basics and they have new technology to help them.

"These days, there are professional golfers at the age of 16 years old. When I look back at my own life, I sometimes joke and ask why was I born early?"