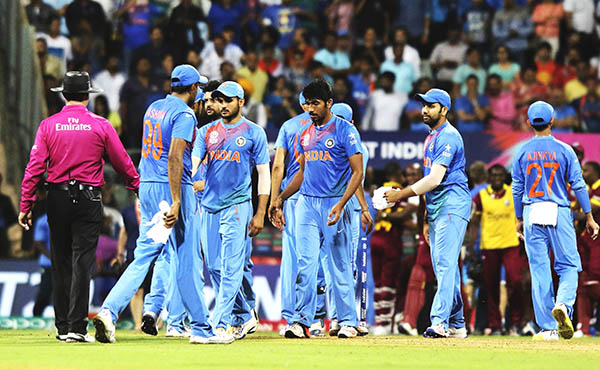 Indian player walk back after the match

“When they started batting the first few overs were fine, but after that there was a considerable amount of dew which meant the spinner couldn’t bowl how they would have liked to,” Dhoni said.

India had its moments to come back into the match which ultimately ended up in a one-sided victory for the 2012 champion West Indies.

Twice India got rid of Simmons, first when the right-hander was on 18 and then when he reached 50, only to see the bowlers overstepping the crease and bowling no-balls.

“The only thing I’m disappointed about is the two no-balls,” Dhoni said.

“I feel that the point at which the no-balls were bowled were quite crucial. If we had got those wickets, we would have got the opportunity to bowl at one or two overs of the spinners and get away with them without giving too many runs.

“A no-ball is something that can be avoided especially the front foot no-ball ... the only thing is that if you don’t want to bowl a no-ball you should never bowl a no-ball.”

Dhoni, who led India to victory in the inaugural 2007 World Twenty20 in South Africa, said he had no plans to quit the shortest format.

“I was hoping it was an Indian media guy because I can’t really say if you have a brother or a son who can play for India as a keeper,” Dhoni replied to a question by a non-Indian journalist.

“Do you think I can survive until the 2019 World Cup?” Dhoni questioned the same journalist, who said: “Yes, sure.”

“Then you have answered the question,” Dhoni said.