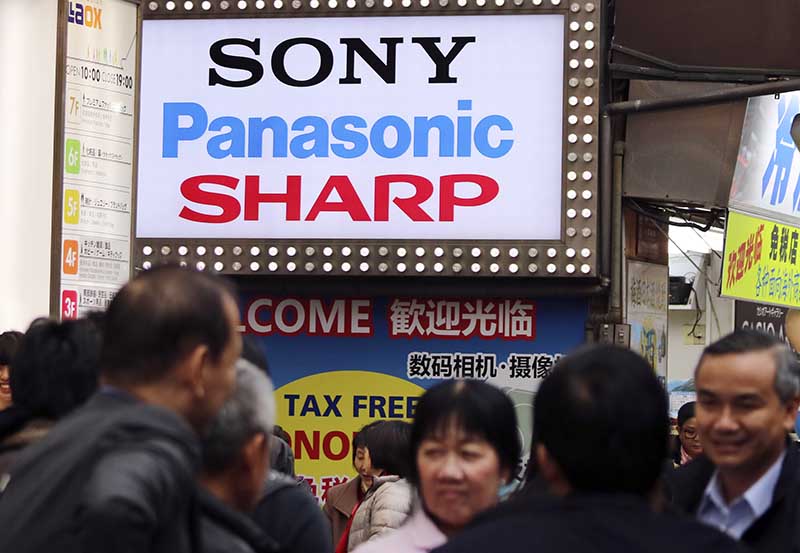 Brand names of Japanese electronics makers, including Sharp, on a signboard of a retailer at Akihibara shopping district in Tokyo yesterday

Tokyo: The head of Taiwanese contract manufacturer Foxconn yesterday pledged to turn around Japan’s Sharp Corporation by driving change at the struggling LCD panel and home appliance maker, as the two companies signed a takeover deal after a one-month delay.

Foxconn, also known as Hon Hai Precision Industry Company, is buying a 66 per cent share in Sharp for 389 billion yen ($3.5bn) in the first foreign takeover of a major Japanese electronics company. A giant in contract manufacturing, Foxconn assembles Apple iPhones and other products for name-brand companies.

The two companies held a signing ceremony yesterday at a large-screen LCD panel factory that they have jointly managed outside the west Japanese city of Osaka since 2012.

“I see us as a catalyst for change,” Foxconn founder and chairman Terry Gou said at a news conference following the ceremony. “If we cannot drive change in Sharp, our global competitors will eat us alive.”

Sharp, a leader in LCD technology and a maker of flat-screen televisions and smart appliances, has been hit hard by fierce price competition for LCD displays.

Kozo Takahashi, the president of the 104-year-old Japanese company, said the infusion of capital from Foxconn would improve Sharp’s financial situation and allow it to “invest in the new growth initiatives that were suppressed due to the financial challenges we have been facing in recent years.”

Both Takahashi and Gou paid tribute to Sharp’s history of innovation, which includes the world’s first LCD calculator, and said they would seek to marry it with the production and supply chain capabilities that Foxconn has developed in the intensely competitive field of electronics manufacturing.

“My direction of turnaround is clear,” Gou said. “We will focus on helping Sharp to transform its technology into products in a speedy and cost-competitive way with high quality.”

The final sale price is about 20pc less than the 489bn yen that Sharp said Foxconn had agreed to pay a month ago. News reports say that Foxconn was concerned about taking on additional liabilities that it learned about late in negotiations.