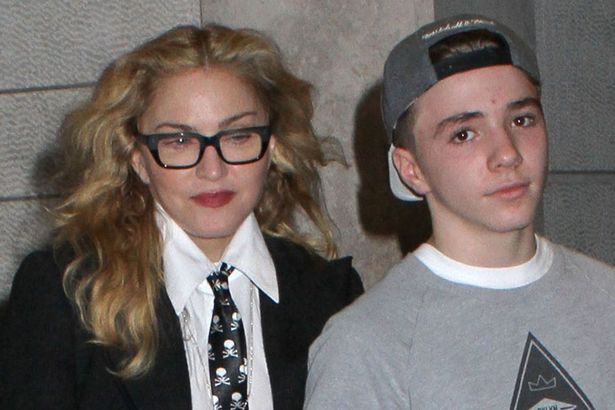 The bitter custody battle being fought between Madonna and her ex-husband for their son Rocco, took an astonishing turn.

For four months, the former A-list power couple have fought over the future of their son Rocco, who is refusing to return to New York to be with his mother.

In a shocking turn of events, the 15-year old, who has so far stayed out of the spotlight, has apparently set up a social account that very publicly brands his mother 'a bitch'.

The Instagram account which has been created in the name of 'Rocco Ritchie', describes him as a 'son of a bitch' in a description written just below a close-up picture of him.

Madonna, 57, who The Mail reveals will fly to Britain on Tuesday to see her son for the first time since before Christmas, is understood to be ‘deeply concerned’ for Rocco and keen to get their relationship back on track.

Although the account’s name, image and biography are public, all the pictures shared are private, prompting speculation that it really does belong to Rocco.

The display photo on the page has reportedly changed three times last week, and all appeared to be selfie-style close-ups of the teen’s face.

Rocco has been absent from social media since January when he famously deleted his public Instagram account, which had 140,000 followers, reportedly after his mother shared a picture of him wearing his long hair in bunches.