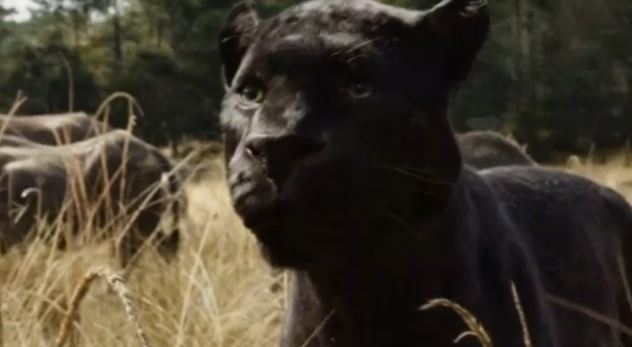 Of all of the impressive details to appear on screen in Disney’s live-action adaptation of “The Jungle Book,” none is more startling than a title card at the close of the end credits reading: “Filmed in Downtown Los Angeles.” So immersively does the film’s visual-effects team craft every tree, waterfall and flower of Rudyard Kipling’s fantastical subcontinental setting, and so carefully are the talking CGI animals rendered, it almost beggars belief that the whole thing was shot in a 12-story building overlooking the 110 freeway. But aside from investing in top-drawer digital craftsmanship, perhaps the canniest move Disney made on this film was hiring Jon Favreau to helm it. Maintaining the buoyant heartbeat beneath all the digital flash, Favreau never loses sight of the fact that he’s making an adventure story for children — no small matter in a kid-pic landscape flooded with inappropriately gritty reboots and frenetic distraction devices — and when positive word of mouth arrives to buttress Disney’s all-out marketing efforts, the studio should have a substantial hit on its hands.

Favreau already has one four-star family pic to his credit with “Elf,” but the most important touchstone from his filmography here is probably “Iron Man,” in which the director hit all the marks of an effects-heavy tentpole while still allowing the film to breathe where it needed to. His lightness of touch proves an enormous asset, as he builds this jungle into the type of dangerous, sometimes pitiless setting that an average 10-year-old would nonetheless never want to leave. It can’t rival the woolly looseness of Disney’s 1967 animated classic, of course, but it succeeds on its own so well that such comparisons are barely necessary.

Pulling freely from Kipling’s stories, Disney’s own animated treatment, and the inventions of screenwriter Justin Marks, this “Jungle Book” certainly imposes a bit more of a strict hero’s-journey framework onto the source materials, yet rarely does it lapse into the sort of po-faced seriousness that tends to sour so many aggressively modernised fairy stories. Kipling’s story “Mowgli’s Brothers” serves as the film’s jumping-off point, and we open on the 10-year-old man-cub (first-timer Neel Sethi) as he’s deep into his wolf training. Discovered abandoned in the jungle by the sage black panther Bagheera (voiced by Ben Kingsley, all exasperated officiousness), Mowgli has been raised by wolf couple Raksha (Lupita Nyong’o) and Akela (Giancarlo Esposito), but his development is lagging behind that of his lupine siblings, and Bagheera admonishes him for using human “tricks” like tool building, instead of learning the ways of the pack.

When a dry season forces predators and prey into a brief “water truce,” the rest of the jungle gets a look at the wolf pack’s unusual new charge. The despotic Bengal tiger Shere Khan (Idris Elba) takes exception, having lost his left eye to an encounter with mankind’s “red flower,” fire, and demands the boy be surrendered to him. Akela stares down the tiger, but the conflict is enough to convince Mowgli to travel with Bagheera to rejoin human civilisation; on their way, Shere Khan springs a surprise attack, and Mowgli flees off into the deep jungle alone.

It’s here that the familiar plot beats from Disney’s first “Jungle Book” outing kick in, and Mowgli joins forces with an ingratiatingly lazy bear, Baloo (Bill Murray). As much as modern blockbuster style might demand some sort of theme-park-ready setpiece for every reel, Favreau clearly understands that the Mowgli-Baloo relationship is the real key to the story, and he slows the film’s pace long enough to build up an effective hangout vibe, with Murray voicing the role as the world’s most charming ursine used-car salesman.

Whether the sloped-shouldered, heavy-lidded Baloo is designed to look a bit like Murray or Murray simply looks like a half-napping bear is open to debate, but it’s only with him that the film ever risks setting foot into the uncanny valley: Otherwise, the animal effects are overwhelmingly successful, taking the standard set by Rhythm and Hues’ CG tiger in “Life of Pi” and applying it throughout. It isn’t just that the animal movements scan as real — Shere Khan in particular is carefully rendered to be intimidatingly weighty when looming in the foreground while lighter than air when in flight — but they’ve figured out just how much to anthropomorphise the animal mouth movements to make their speaking seem natural, without turning them into cartoons.

Not all of it works. The all-but-contractually-obliged reprisals of Mouse House musical staples (“The Bare Necessities,” “I Wan’na Be Like You”) are inorganically threaded in, and the decision to cast King Louie (Christopher Walken) as a a grotesque, Col. Kurtz-esque gigantopithecus only makes the absence of Louis Prima sting even stronger. But when the film gets it right, it sings. The appearance of Kaa the snake (voiced by Scarlett Johansson, in the closest we’re likely to get to an “Under the Skin” sequel) is magnificently done, exploiting the surround-sound capabilities of Dolby Atmos and a sense of slowly shifting scale for an unnervingly trippy sequence that stops just short of something that would trouble children’s sleep.

Tackling his first feature-film role not only as the lead, but also as the only flesh-and-blood character on screen, young Sethi acquits himself well under what must have been challenging circumstances. His line readings don’t always fully pop, but he possesses a loose-limbed naturalness on camera, and perhaps most importantly for a film like this, he genuinely seems to be having fun. Voice work is excellent all around, from Nyong’o’s maternal warmth to Elba’s arrogant malevolence, and the late Garry Shandling has his moments as Ikki, the skittish porcupine. Composer John Debney offers a lush symphonic score, and the 3D work is impressive enough to justify the ticket price.