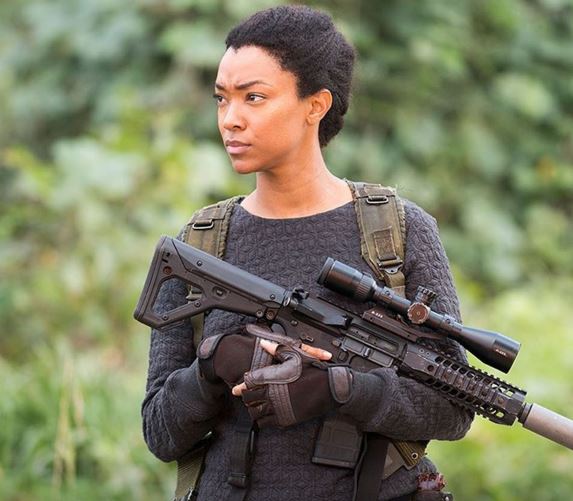 The character of Negan finally made his long-awaited appearance in ‘The Walking Dead’s’ season finale. In a sense, though, anticipation for his arrival shanghaied this entire flight of episodes, casting one of the longer TV shadows in recent memory. That resulted in a year with some impressive highs – see the moral conundrum of cold-bloodedly murdering members of a rival group – and abundant lows, including the cliffhanging finish.

As the Los Angeles Times’ Mary McNamara astutely observed prior to the finale, the show’s writers have at times sold out their characters, indulging in ‘Scandal’-like ‘OMG’ moments. Perhaps foremost, the programme has engaged in stunts intended to tease out plot threads that a show this popular, frankly, needn’t (and shouldn’t) employ.

There were multiple examples of that this season, from the too-cute spin that surrounded the uncertainty over whether the character of Glenn (Steven Yeun) was dead to the finish of the penultimate episode, where a bullet and a spray of blood provided a big twist to an otherwise so-so hour. And damned if the producers didn’t do that again in the finale (and SPOILER ALERT if you haven’t watched), by opting not to disclose who was on the other end of Negan’s bloodthirsty bat.

Thanks for your patronage, gang. Good luck guessing who’s dead. Have a good summer, we’ll see you around Halloween!

That’s a shame, since the extended 93-minute episode was at times a minor masterpiece of tension and almost unbearable intensity, as Negan’s minions made clear just how overmatched the regulars were, in a prolonged show of force that demonstrated their ruthlessness. Special kudos should go not only to director Greg Nicotero but composer Bear McCreary, whose score ratcheted up those emotions at every turn.

Moreover, Jeffrey Dean Morgan (looking a whole lot less cuddly than he does on ‘The Good Wife’) was a perfect choice for the key role of Negan, bringing a mischievous smile to his utter brutality. Whatever bad taste the finale might leave in a lot of mouths, the opportunity to see Morgan unleashed in this fashion is a tantalising prospect for the coming season.

That said, it will take a while to gargle out that cliffhanger. ‘The end of the story is what people saw,’ showrunner Scott M. Gimple stated on ‘Talking Dead,’ the program’s fawning after-show, engaging in more of the irritating double-talk that he delivered in the midst of the ‘Is Glenn dead?’ mania.

In a sense, this storyline has been somewhat complicated by the current strength of its cast, which made the build-up to Negan’s debut – and the anticipation that he would announce his presence by killing somebody very, very significant – all the more frenzied. (Glenn was his victim in the comics, but seriously, that dude’s suffered enough.)

As noted, the frustrations associated with the show’s narrative tactics shouldn’t obscure what it does so well. That ranges from small moments – like those in the finale involving Melissa McBride and Lennie James – to how it has explored matters of morality amid a lawless, kill-or-be-killed world. As this season has made clear time and again, the characters have come an awfully long way from the statement by Rick (Andrew Lincoln) early on that ‘We don’t kill the living.’

Even so, fans shouldn’t relish having their chains yanked, and it’s not like people wouldn’t tune in for next season’s premiere if they already knew who had gotten his or her skull bashed in. Success, of course, tends to paper over a multitude of ills, and outlets that cover the series (including this one) would rather gripe about its perceived shortcomings than dare sacrifice any of the traffic or ratings that flow from hanging on its every beat. Indeed, the number of movie ads in the finale – most aimed at an elusive young-male demographic – offered an awesome display of the show’s commercial power, as if one is required.

Still, to borrow one more baseball metaphor, with such a murderers’ row of aces in its bullpen, ‘The Walking Dead’ shouldn’t have to resort to throwing the creative equivalent of junk pitches. And that’s why despite its highlights, the finale simply drove home the sense that while this season wasn’t a complete swing and a miss, those in charge continue to make aggravating unforced errors.