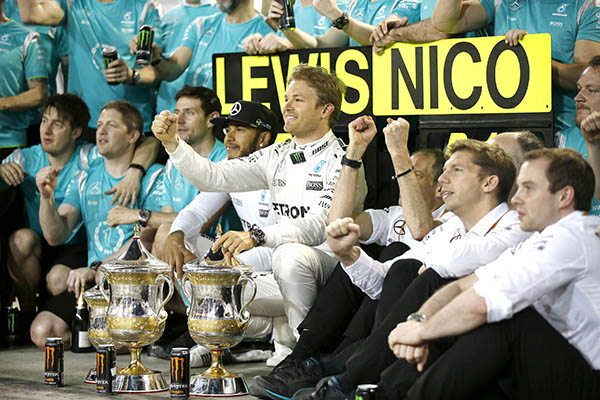 Manama: After two successive season-opening wins, Nico Rosberg is “living the moment” but says he remains fearful of Ferrari following their demonstration of potential in Sunday’s Bahrain Grand Prix.

The 30-year-old German leads the embryonic drivers’ championship by 17 points ahead of his Mercedes team-mate, defending three-time champion Lewis Hamilton.

That, he says, has given him great satisfaction, but in the wake of his 16th career victory at the Bahrain International Circuit, he was keen to point at the advances made by Ferrari despite their early-season setbacks.

“I am not thinking about the season,” said Rosberg. “I am going step-by-step. I am just enjoying it at the moment.

“I have been very privileged to drive this car and go for wins. When I go to China, I know I am going to fight for the win there as well so it is such a great feeling to have...

“Winning is awesome. Celebrating with the team and getting all those points... It is great to start the season like that, but I am not looking too far ahead, I am living for the moment.”

He said he was well aware that Kimi Raikkonen who split the two ‘silver arrows’ cars and finished second behind him for Ferrari had demonstrated threatening speed on a day when his team-mate Sebastian Vettel had failed to start a race for the first time following an engine failure.

“I was in control,” he said. “We were just managing the race, trying to reduce risks strategy-wise, pit-stop wise, and bring the race home.

“But at the same time, Kimi showed good pace in the race and we know that Ferrari are super close. So, we need to keep pushing. They haven’t shown what they are able to do yet. That’s clear. They have had so many mishaps, which have cost them dearly, so we haven’t seen the real Ferrari yet.

“We have to be careful. They are coming on at us and they are strong.”

Ferrari’s potential has been masked this year by difficulties - a strategy call that failed in Australia where Raikkonen retired with turbo troubles, Vettel’s reliability problems and Raikkonen’s poor start in Bahrain.

For Rosberg, Ferrari’s problems and Hamilton’s two successive opening lap collisions have gifted him two victories and a perfect start to the 21-race season.

Champion Hamilton, who has taken both pole positions so far, departed Bahrain with a smile, however. “I am feeling very chilled,” he said. “It is just the start of the season....”