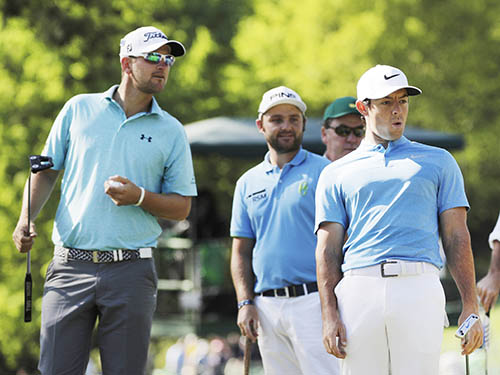 From left, Bernd Wiesberger, Andy Sullivan and McIlroy react to McIlroy’s putt on the sixth hole during a practice round for the Masters tournament yesterday

AUGUSTA: Rory McIlroy has grand slam ambitions in his sights at this week’s Masters and he thrilled the fans with a hole-in-one during practice at Augusta National on Monday.

The Northern Irish world number three aced the par-three 16th with a seven-iron from 170 yards, sparking thunderous roars from the watching galleries.

“I don’t think I have ever heard a roar that large during a practice round,” a smiling McIlroy told reporters after his dramatic shot earned him a 3&2 win over England’s Chris Wood in a friendly match-play encounter.

Aged just 26, McIlroy has already claimed four major titles and this week he will be bidding for his first Green Jacket at the picturesque ‘Cathedral of Pines’, to complete a career grand slam of golf’s four blue riband events.

Though he has not won a tournament this year, he came close with a tie for third at the WGC-Cadillac Championship last month and likes his progression at the Masters where he shared eighth place in 2014 before finishing a career-best fourth last year.

“I feel like my game is in good shape,” said McIlroy, adding that he loved to play competitive matches during practice rounds. “It gets me into a nice mindset ... so I’m going to try to do the same tomorrow, play 18 and have a match with someone.

“That’s the best way for me to prepare. It’s competitive. You’re trying to shoot a score.”

Asked to assess the condition this week of the heavily contoured layout at Augusta National, McIlroy replied: “Not very different at all to what we saw last year.

“The way the course is now is probably like it played last year. a little soft and a bit slow. I am sure they are trying to get it faster and firmer as the week goes on.”

Meanwhile, former major winner Greg Norman says he will be shocked if fellow Australians Jason Day or Adam Scott don’t pull on the champion’s green jacket at the US Masters this week, with both players having the “mojo” to win.

The retired star, who reigned as world number one for 331 weeks in the 1980s and 1990s, said it was hard to split his countrymen, who are both in a rich vein of form.

“I’d be shocked if I didn’t see Jason or Adam wearing the green jacket at the end of the week,” Norman told News Corp Australia newspapers in comments published Tuesday.

“They clearly have that energy and mojo from being recent winners in their favour.

“Mentally, they’ve seen the shots, hit the shots, made the putts and felt the feeling. It’s so fresh in the head they don’t have to summon enormous concentration to bring positives forward.”

Day enters the tournament at Augusta as world number one after back-to-back wins in the lead-up while Scott is seventh in the global standings, fresh off tournament triumphs at the Honda Classic and WGC Cadillac Championship.

While Norman sees them as likely winners, he said the field was one of the best he has seen in years.

“The depth of great players is as deep as I’ve seen on a global front at the Masters and I first played there in 1981,” he said.

As well as Day and Scott, he cited Jordan Spieth, Rory McIlroy, Bubba Watson, Phil Mickelson and Henrik Stenson as in with a realistic shot.