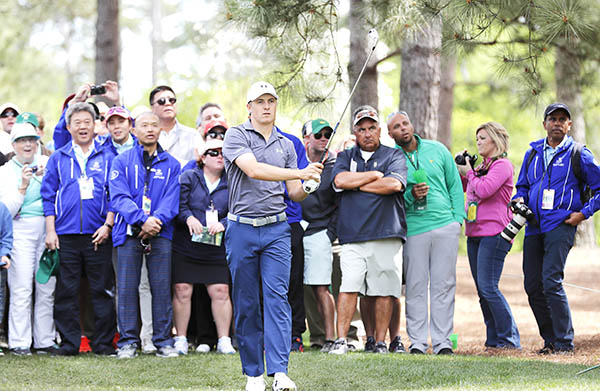 A field of 89 will tee off today at Augusta National in quest of the green jacket awarded a Masters champion, but only one will slide their arms inside the sleeves come Sunday.

Australia’s Day comes off triumphs at Bay Hill and the WGC Match Play. Northern Ireland’s McIlroy has found his form at just the right moment and American Spieth’s record-tying wire-to-wire win from last year still resonates in the Georgia pines.

“I would enjoy a Spieth McIlroy Fowler Scott Watson Mickelson Sunday,” Day said. “That would be a lot of fun.”

Day has won six of his past 13 events, including his first major title at last year’s PGA Championship, to overtake Spieth as world number one.

“I feel comfortable with where I’m at, walking around the grounds, number one in the world, it’s a good feeling,” Day said. “But I know I can’t take it for granted, because things can change pretty quickly.”

Day is trying to become only the fifth player to win the PGA one year and the Masters the next to join Phil Mickelson, Tiger Woods, Jack Nicklaus and Sam Snead.

“It’s really tough with how everyone is playing,” Day said. “Jordan and Rory are young guys, so we’re all kind of motivating each other, and Rickie as well.

“Adam Scott and Bubba Watson are doing a fantastic job. It’s just really fun to see how the health of the game is right now and how competitive it is.

“I want the best playing against the best and fighting it out,” Day said.

McIlroy is on hand to capture a fifth major title and complete a career Grand Slam at age 26, joining Jack Nicklaus, Tiger Woods, Ben Hogan, Gary Player and Gene Sarazen in having won all four majors at least once.

“It’s definitely a motivation to be able to put your name alongside those five guys,” McIlroy said. “I haven’t been in a situation where I’ve felt the pressure of it, really, because I didn’t have a real chance to win last year.”

Spieth will try to become the first back-to-back Masters winner since Tiger Woods in 2002. Woods is skipping this year’s event because he has not fully recovered from back surgery last year.

“Going to try and just use last year as momentum,” Spieth said. “We’ve already done it, so it’s not like I’m chasing my first major.”

Scott, bolstered by long-time Woods caddie Steve Williams, will hunt for his second Masters crown after a breakthrough 2013 triumph.

I’ve got three tough days to put myself in a position to win a Masters,” Scott said. “Everything in the lead up has gone well. It’s up to me to execute it now.”