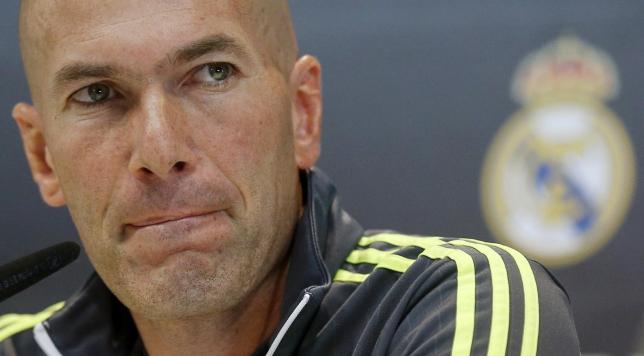 Wolfsburg: Real Madrid coach Zinedine Zidane urged his side to remain calm after their Champions League hopes suffered a setback with a shock 2-0 loss at VfL Wolfsburg in the first leg of their quarter-final tie on Wednesday.

The Frenchman, who took over from the sacked Rafael Benitez in January, said the 10-times European Cup winners could still turn the tie around in Madrid next week against Wolfsburg, who are playing in their first quarter-final.

"It is always disappointing to lose a Champions League game, especially the way we lost it," he told reporters. "But we need to remain calm and united.

"We won't go crazy now. We have to believe and know that we have a difficult game and see if we can turn it around. That is what happens when you don't play with intensity.

"We have to rest and think about the return leg because we have the chance to change everything," added Zidane, who won the title with the Spanish club as a player in 2002.

Real went into the game buoyed by their 2-1 victory over Barcelona in the 'Clasico' on Saturday and knowing the Champions League remains their best hope of silverware this season.

Zidane had seemingly turned Real's season around after winning six successive matches in all competitions before Wednesday, but despite a strong start to the game, they suffered their first defeat in the competition this season.

Two goals in seven minutes from Ricardo Rodriguez and Maximilian Arnold gave the hosts a two-goal cushion after Real had pegged the Germans back early in the first half.

"I think it was the first half that caused us problems," Zidane said. "We were missing concentration at times, just things that happen in football, mistakes that you end up regretting.

"We did it better in the second half. Before the game the chances were 50-50 but now we must use all opportunities to turn things around and make everything well in the return leg.

"We lost this first leg, we are aware of that. But we have the chance to turn it around next week. We have 90 minutes and we will be prepared well to take on that task."