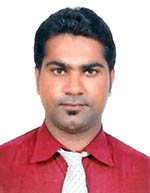 P S Red, who won the toss and bated first, put up a total of 185 runs for the loss of seven wickets. Aurangzeb scored 92 runs for PS Red. In reply, Lanka Lions could only manage 129. Nilshad scored 20 runs for the Lions while Muzamil, Asad and Bashir took three wickets each for PS Red.

BCC A defeated Titans by two wickets in another fixture. Yasser top scored with 34 runs as Titans made 123. Ashraf and Sarfraz took two wickets each for BCC A. BCC A managed to reach the winning target losing eight wickets. Kashif scored 36 runs for BCC A while Tayab and Kashif took three wickets each for Titans.