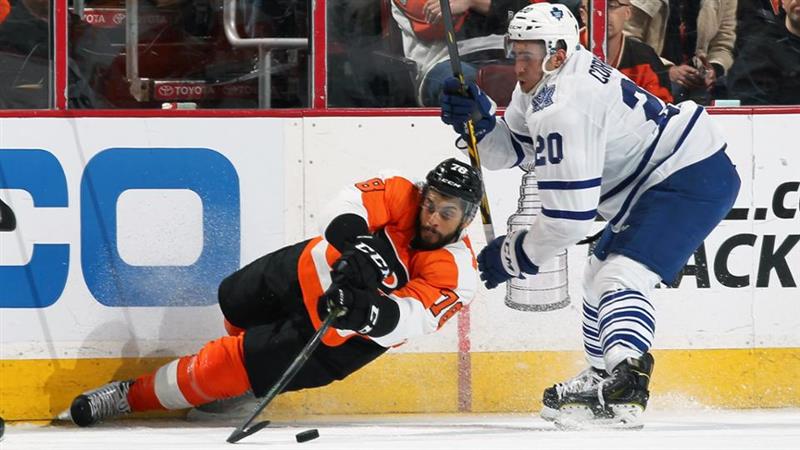 Coming off back-to-back losses that left their postseason chances very much in doubt, the Bruins scored twice in the first 2:44, then added two more in the first 45 seconds of the third period in a 5-2 victory over the Detroit Red Wings.

The Bruins, who host the Ottawa Senators on Saturday, are tied with Detroit but trail in the tiebreaker. Both teams have 93 points with one game remaining.

Playing the role of spoiler to near perfection, Toronto was under constant duress from a desperate Philadelphia team, yet prevailed thanks to Jonathan Bernier's 41 saves.

The Leafs, who have the worst record in the NHL, knocked the Flyers from the final wild card position, and Philadelphia is now one point behind both Detroit and Boston with just two games to play.

Thomas Greiss made 36 saves as the Islanders took over third place in the Metropolitan Division with a victory against the Rangers at Madison Square Garden.

Sidney Crosby scored the game-winner with 1:00 left in overtime and Pittsburgh defeated Washington despite squandering a 3-0 second-period lead.

The Penguins, winners of eight straight and 14 of 15, clinched second-place in the Metropolitan Division and home ice in the first round of the playoffs. If form holds, Washington and Pittsburgh would meet in the second round.

Max Pacioretty scored his 28th goal of the season and Charlie Lindgren won his NHL debut as Montreal defeated Carolina.

The 22-year-old Lindgren was playing college hockey for St. Cloud State a few weeks ago and allowed a goal on his first NHL shot, but settled down to stop 26 shots for the victory.

The win allowed the Lightning to clinch second place in the Atlantic Division.

Ottawa left a positive impression with its fans by defeating Florida in the last game at Canadian Tire Centre this season.

The loss snapped a four-game winning streak for the Panthers, who have already secured home ice advantage in the first round of the playoffs. The Senators will miss the playoffs for the fourth time in seven years.

It was the second straight win for the Predators, who are locked into the first wild-card spot in the Western Conference and will play the Pacific Division winner -- either Anaheim or Los Angeles -- in the first round next week.