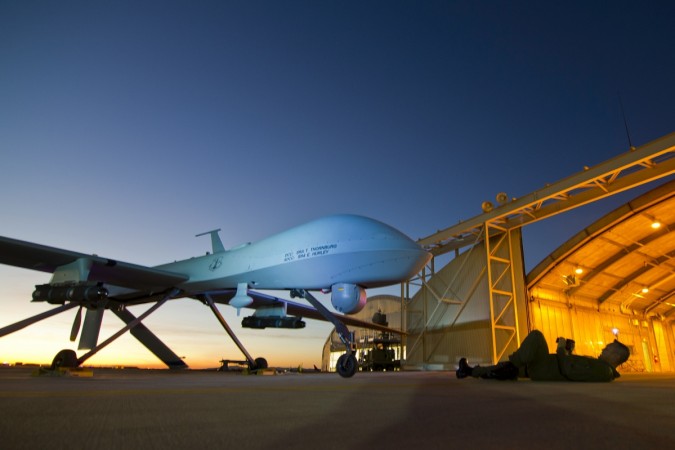 India is in talks with the US to purchase 40 Predator surveillance drones, officials said, a possible first step towards acquiring the armed version of the aircraft and a development likely to annoy Pakistan.

India is trying to equip the military with more unmanned technologies to gather intelligence as well as boost its firepower along the vast land borders with Pakistan and China. It also wants a closer eye on the Indian Ocean.

New Delhi has already acquired surveillance drones from Israel to monitor the mountains of Kashmir, a region disputed by the nuclear-armed South Asian rivals and the cause of two of their three wars.

As defence ties deepen with the US, which sees India as a counterweight to China in the region, New Delhi has asked Washington for the Predator series of unmanned planes built by privately-held General Atomics, military officials said.

"We are aware of Predator interest from the Indian Navy. However, it is a government-to-government discussion," Vivek Lall, chief executive of US and International Strategic Development at San Diego-based General Atomics, told Reuters.

The US government late last year cleared General Atomics' proposal to market the unarmed Predator XP in India. It was not clear when the delivery of the drones would take place.

The navy wants them for surveillance in the Indian Ocean, where the pilotless aircraft can remain airborne for 35 hours at a stretch, at a time when the Chinese navy is expanding ship and submarine patrols in the region.

Moves by India to enhance its defence capabilities have in the past provoked sharp reactions from Islamabad, where the government and military are worried about falling further behind their bigger rival in the arms race.

Pakistan's foreign ministry could not be reached for comment on Friday, the start of the weekend there, while the military had no immediate comment.

India's air force has also asked Washington about acquiring around 100 armed Predator C Avenger aircraft, which the US has used to carry out strikes against Islamist militants in Pakistan's northwest and neighbouring Afghanistan.

But it would need clearance from the Missile Technology Control Regime group of 34 countries as well as approval from US Congress before any transfer of lethal Predators could happen, officials said.

The push for the drones comes as US Defence Secretary Ash Carter heads to India this weekend for talks to cement military collaboration in the final months of the Obama administration.

Indian military officials said they expected the request for the armed aircraft to figure in Carter's talks with his Indian counterpart, Manohar Parrikar.

Washington wants India to sign a set of agreements including on the use of each other's military bases that would help them operate together.

Prime Minister Narendra Modi's government has signalled its willingness to move forward with the proposed pacts after the previous administration did not act for more than a decade.

Retired air vice marshal Manmohan Bahadur said the proposed acquisition of armed Predators would give the military the ability to carry out cross-border strikes, or even attack targets lying deeper inside a neighbouring country.

"But at the end of the day, it's a political decision. It's one thing to lob artillery shells, its another to use air power, that's an escalation," he said.

India has not moved against Pakistan militarily despite blaming militant groups based there for orchestrating attacks on its soil including one on Mumbai in 2008, in part out of fear it would spiral into a broader conflict.

But a drone strike might be a less risky option, experts said.

Ejaz Haider, a Pakistani security analyst, said Islamabad would object to the transfer of such drones in the region.

But he questioned their effectiveness if they entered Pakistani air space, since it would probably try to shoot them down, something it did not do with US drones.

"There is obviously going to be push-back from Pakistan, because if it (the drone) does get through in some way or other it enhances Indian capability," he said.