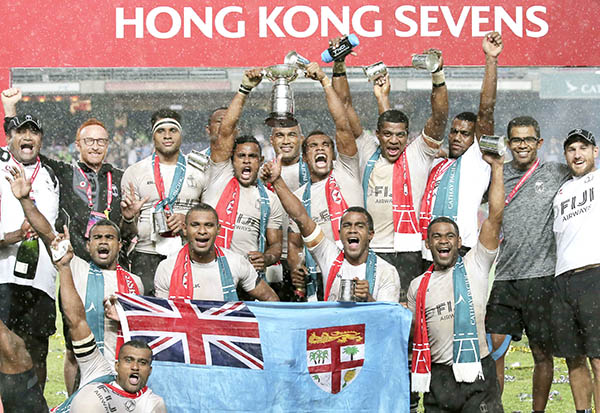 Fiji celebrate after winning their final match against New Zealand

Fiji, the form team at the Olympics’ unofficial dress rehearsal, outscored New Zealand three tries to one to stretch their championship lead to five points over the Kiwis.

The clinical victory will further raise hopes of Fiji’s first-ever Olympic gold medals in August in Rio, where rugby will feature at the Summer Games for the first time in 92 years.

In a tense start to the final, New Zealand’s Pita Akhi opened the scoring with a searing run down the right, in which he outstripped one Fijian defender and sidestepped another.

Fiji hit back and made it 7-7 at half-time when Jerry Tuwai took a quick penalty near the line and dived over before the New Zealanders could react. Substitute Kitione Taliga put Fiji 14-7 ahead in the second half when he sold a dummy and accelerated through the slimmest of gaps in the Kiwi defence.

And Semi Kunatani scored beneath the posts after Fiji out-muscled New Zealand in a ruck and passed their way through a scattered defensive line.

New Zealand coach Gordon Tietjens was encouraged by a much-improved display by All Blacks star Sonny Bill Williams, who finally looked on the pace and produced a string of trademark offloads.

But the Kiwis were always second favourites after being taken to double extra-time by South Africa in their thrilling 12-7 semi-final win.

“Our goal like all the other teams is the Olympics at the end. So you learn from these losses and we were beaten by a very good Fijian team today that played better than us,” Tietjens said.

England, still sentimental favourites in the ex-British colony, lifted the plate trophy with a 19-0 win over the United States, after they lost 14-5 to Australia in the Cup quarter-finals.

And Japan booked a place at next year’s event when they beat hosts Hong Kong 24-14 in the final of the concurrent qualifying tournament.

Fiji’s players, who mostly come from the Pacific country’s impoverished villages, have an unpleasant surprise in store after organisers scrapped prize money this year – a fact that Ryan said they were not yet aware of.