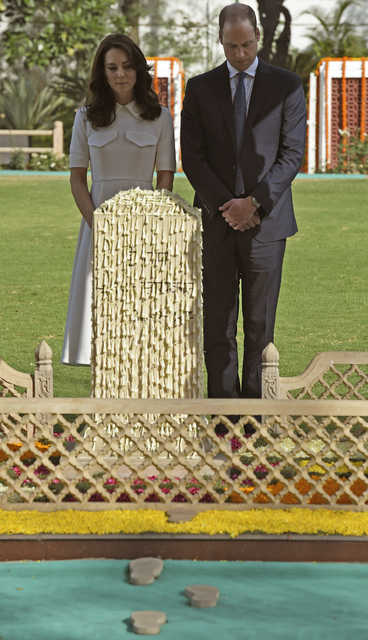 Prince William and his wife Kate pay tribute during a visit to Gandhi Smiriti in New Delhi. (AP Photo)

In a close to 45-minute visit to the Gandhi Smriti on Tees January Marg, the royal couple also saw the exhibits there and came to know that Gandhi learned to wear a tie and play violin during his stay in London as a student.

The Duke and Duchess Cambridge also paid tribute to Mahatma Gandhi at the Martyr's Column. The Father of the Nation was killed on January 30, 1948 by a Hindu fanatic at the Birla House when he was taking a stroll there. The House, where Gandhi spent the last few years of his life, was later turned into a memorial.

They also visited the museum, the khadi-weaving room and expressed keen interest in knowing about Lord Mountbatten's tribute to Gandhi among other eminent personalities, after his death.

The royal couple were particularly keen about the spinning wheel the use of which he popularised all his life.

"They (couple) were curious to know about Gandhiji and his life's philosophy. Their reaction was 'such a simple life' as they saw his pictures and visited his living room," said Depanker Shri Gyan, Director of Gandhi Smriti, who accompanied the royals around the memorial.

"They were very excited and happy to see him spinning the wheel. They wanted to know why Gandhiji spun the wheel and what does it symbolise," Gyan said.

"They asked why was the spinning wheel used and how did it become a symbol of Indian nationalism. To this, we said that this symbolised economic independence and promoted the idea of 'swadeshi'. They also asked how khadi is made," said Sailja Gullapalli, a research associate with the Gandhi Smriti, who also accompanied the couple throughout their visit to the museum.

The royal couple wrote a note 'To India's Visionary Leader' in the visitor's book.

Known for their sartorial grace, the couple looked elegant in their attire. Kate wore a cream dress by Emilia Wickstead on her first outing in the city.

The couple is on a seven-day tour of India and Bhutan, aimed at building up strong bonds with the two countries.