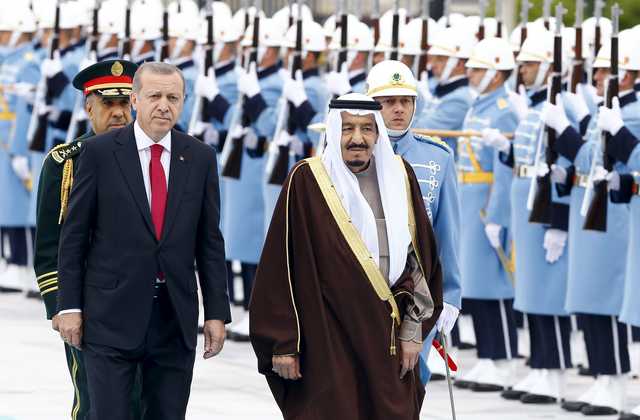 Salman was met by Erdogan at his vast new presidential palace with an honour guard of Turkish soldiers as well as 16 costumed warriors representing the various Turkic empires in world history.

Mocked when their first appeared in 2015, the spear-carrying and mustachioed warriors are now regularly brought out for Erdogan's most honoured guests.

Salman and his delegation are set to hold several hours of talks with the Turkish leader before heading to Istanbul for the summit of the Organisation of Islamic Cooperation (OIC).

Saudi Arabia and Turkey both believe the ousting of President Bashar al-Assad is the key to solving the Syrian conflict and back rebel groups fighting his regime.

The two overwhelmingly Sunni Muslim powers have in recent months moved to considerably tighten relations that had been damaged by Riyadh's role in the 2013 ousting of Egyptian president Mohammed Morsi, a close ally of Ankara.

Erdogan appears to have built close ties with Salman after he became king in January 2015 following the death of his half brother Abdullah.

In February, Turkey began hosting Saudi jets and military personnel and its Incirlik air base to join the air campaign against Islamic State jihadists.

The lavish arrangements made for Salman's visit have also raised eyebrows in the Turkish press, with the king reportedly staying in a 450 square-meter (4,850 sq ft) hotel suite and renting 500 luxury vehicles for his vast delegation.