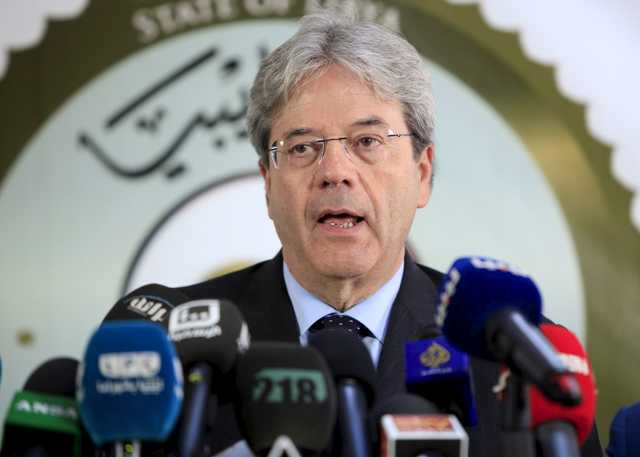 Gentiloni speaks during a news conference in Tripoli, Libya. (Reuters)

Parliamentarians have been summoned to a session on April 18 for the vote and have been given security guarantees, lawmaker Ali Tekbali said.

Meanwhile, Italy's foreign minister hailed Libya's new unity government Tuesday as a "game changer" as he held talks in Tripoli during the first visit by a top Western official since 2014.

It came as representatives of dozens of countries and international organisations including the World Bank held talks in neighbouring Tunisia on ways to help the unity government shape its priorities.

World powers see the establishment of the unity cabinet as vital to tackling a raging jihadist insurgency and rampant people smuggling in the North African state.

"This decision was a game changer," Gentiloni said in Tripoli of the establishment of the UN-backed government.

Foreign embassies would be reopened in the capital in "the near future", he added.

Italy is supporting the unity government "because it will pave the way to the stabilisation of Libya – then we can manage human trafficking and smugglers and terrorism," Gentiloni said.

He said that European countries were ready to work with Libya to tackle the Islamic State (IS), but that the country's government and people must lead the fight.

"We can co-operate but cannot decide for the Libyans," he said before flying to Tunisia to join the international conference.

Gentiloni's brief visit comes nearly two weeks after Sarraj arrived in Tripoli by sea with a naval escort and established his headquarters at a naval base.