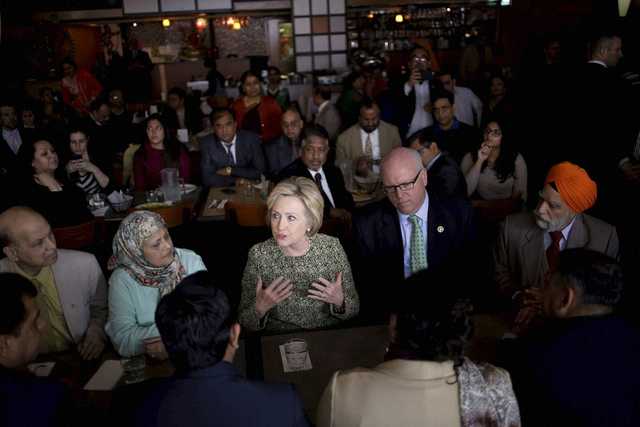 Clinton talks to community leaders and politicians at the Jackson Diner in the Queens borough of New York. (AP Photo)

They were shooting for funny. Instead, the racially charged comedy routine between Hillary Clinton and New York Mayor Bill de Blasio has prompted outrage and mockery.

The exchange took place when the Democratic presidential frontrunner on Saturday attended the Inner Circle dinner in New York, an annual black-tie gala where journalists and politicians traditionally poke fun at each other.

In the routine, Clinton gently upbraided the mayor, a former Clinton aide who was late giving her campaign support.

"Thanks for the endorsement, Bill," she said. "Took you long enough."

"Sorry, Hillary. I was running on CP time," he replied, an apparent reference to "Coloured People Time," a cliche stereotype about habitual tardiness.

The quip drew a "No!" from at least one audience member.

African-American actor Leslie Odom Jr, who plays Aaron Burr in the hit musical Hamilton and was also part of the skit, objected to the clearly rehearsed line.

The Daily News called the exchange "a big blunder when a tasteless joke – built off the stereotype that black people are chronically late – fell flat."

New York magazine denounced it as "an amazingly unfunny, terribly executed" joke, questioning whether de Blasio's wife Chirlane, who is African-American, knew about it.

With video of the skit prompting a flood of comments on Twitter, de Blasio appeared on CNN to calm the storm by explaining the joke was scripted and aimed at poking fun at a cliche.

"I think people are missing the point here," he said.

The mayor was making fun of only himself, de Blasio's office added in a statement.

Clinton will be hoping the furor disappears quickly.

She and her Democratic rival Bernie Sanders are working hard to court African-American voters ahead of New York's pivotal primary next week.

Clinton, who has far more support among the group, holds a major lead on the Vermont senator in state polls.