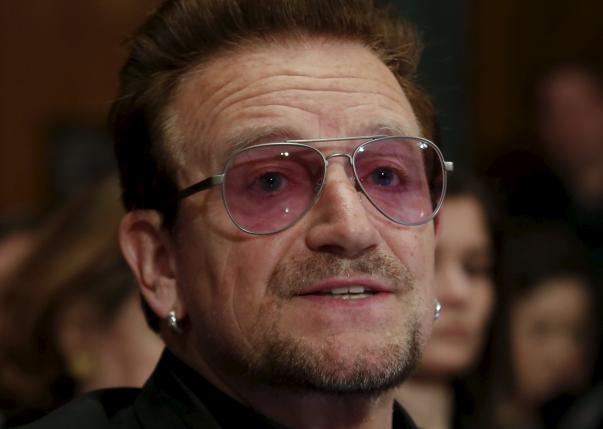 Bono testifies before a Senate Appropriations State, Foreign Operations and Related Programs Subcommittee hearing on 'Causes and consequences of violent extremism and the role of foreign assistance' on Capitol Hill in Washington. (Reuters Photo)

U2 lead singer Bono joined diplomats and aid experts to appeal for US Senate support for a "Marshall Plan" to provide aid to the Middle East much like the massive relief the US provided for Europe after World War Two.

"Aid in 2016 is not charity; it is national security," the rock star, who is also an active anti-poverty campaigner, testified to the Senate subcommittee that oversees foreign aid.

"It could be the best bulwark we have against violent extremism," Bono said.

Republican Senator Lindsey Graham, the chairman of the Senate panel, and a few other lawmakers, have called for a multibillion-dollar aid program to address the crisis in the Middle East and the need for aid for millions of refugees fleeing violence in Syria, Iraq and other countries.

They argued that defeating Islamic State and other militant groups, and preventing the rise of new ones, will require humanitarian aid and economic development, including trade and loan programs.

"I'm a pretty hawkish fellow, but I learned a long time ago ... that you are not going to win this war by killing terrorists," Graham said.

Senator Patrick Leahy, the top subcommittee Democrat, said he would work with Graham on a plan.

The hearing took place days before the Senate Appropriations Committee is expected to release a new spending plan including cuts in international aid. Congress has also been unable to agree on a relief package to fight the Zika virus currently threatening parts of Latin America.

Graham will have a difficult time winning over his fellow Republicans, who tend to be skeptical about international organisations like the UN and generally want tight controls on spending.

For example, Republican Senator Steven Daines said he was concerned about being effective for the American taxpayer. Another Republican, John Boozman, discussed a role for partnerships with private companies.

Bono, who co-founded the ONE international aid organisation, has lobbied in Washington and other world capitals for a variety of causes including debt relief, alleviating world poverty and fighting AIDS.