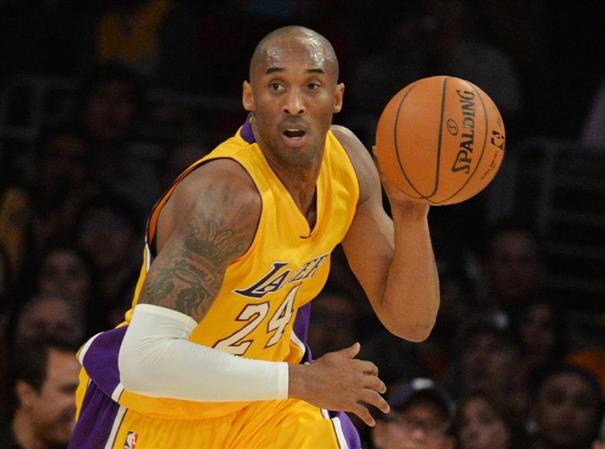 Kobe Bryant plays his 1,566th and final game on Wednesday as the LA Lakers host the Utah Jazz at the Staples Center (AFP Photo)

Los Angeles: The eyes of the basketball world will turn to California on Wednesday as the NBA regular season draws to a close with Kobe Bryant preparing to bid farewell to the sport as the Golden State Warriors chase a place in history.

A perfectly scripted finale will see Bryant play his 1,566th and final game as the Lakers host the Utah Jazz at the Staplescentre for what is certain to be an emotionally charged occasion.

A sell-out 18,000-capacity crowd packed with celebrities will be on hand to salute the last game of the 37-year-old Bryant's two-decade career.

Around 30 of Bryant's former team-mates from different generations led by Shaquille O'Neal will be in attendance to honourthe star while Red Hot Chili Peppers guitarist Flea will play the national anthem.

Bryant announced his retirement from basketball in November, and has spent a challenging 16-65 season with the Lakers being feted by rival fans in different cities across the nation.

It remains to be seen how much game time Bryant will receive on Wednesday, although Lakers coach Byron Scott has indicated he will be given as much time as possible before signing off.

"I know the fans, they would love to see (him) out there for 48 minutes," Scott said.

"That's not going to happen, I can tell you that."

Bryant, who played only 19 minutes of the Lakers' blowout defeat to the Oklahoma City Thunder on Monday, said he was looking forward to his farewell but hinted the occasion may get to him.

"So far, I've been pretty cool about everything," said Bryant.

In an interview with the USA Today newspaper on Tuesday, Bryant said he was not sad about his looming retirement.

"I'm thankful," Bryant told the daily. "I'm not sad at all. I left no stone unturned, I gave everything to the game for 20 years in the NBA and more before that. So I feel very thankful to be able to play this game this long."

Bryant will retire with five NBA titles, having secured his place not only among such Lakers icons as Kareem Abdul-Jabbar, Magic Johnson and Jerry West but also in the pantheon of NBA greats presided over by Michael Jordan.

"He's at the table as one of the all-time greatest," said Eric Pincus, who covers Bryant and the Lakers for the Los Angeles Times and Basketballinsiders.com.

"Now everyone will argue for the rest of time where."

Tickets for Bryant's farewell are the hottest in basketball history, according to online exchange Stubhub.com, which listed exclusive courtside seats beloved of A-list stars at an eye-popping $17,000 early Tuesday.

A spokesman for StubHub said the average price of tickets for the game was just under $1,000, while one fan had paid $27,500 each for two courtside tickets.

Bryant's finale gets under way at 7:30 pm local time (0230 GMT) -- the same time that Golden State will set out to clinch a record-breaking 73rd regular season victory, taking them past the mark of 72 set by the Jordan-era Chicago Bulls in the 1995-1996 campaign.

After stumbling last week with a home defeat to the Minnesota Timberwolves, the Warriors have gone on a formidable charge to the finish line, beating their closest Western Conference rivals the San Antonio Spurs home and away to equal the Bulls' 72-win season and give themselves a chance at basketball immortality.

Golden State star Stephen Curry said the Warriors are now determined to finish the job in Oakland against the Memphis Grizzlies by claiming win number 73 -- even if the priority remains a successful defence of their NBA crown.

"We are in the moment and enjoying the ride, but the goal is to win a championship," Curry said.

"We've put ourselves in a great position to do something no other team has ever done.

"It's hard to step out of the locker room and understand the hoopla that comes with chasing the record. We want to go out and take advantage of an opportunity that may never come again."