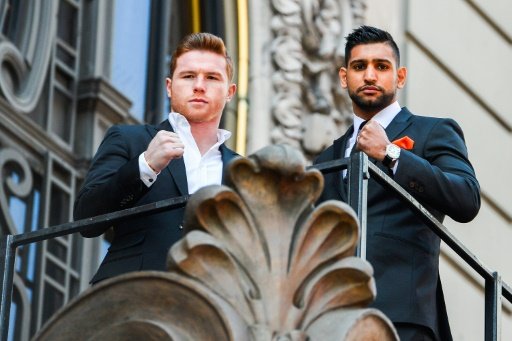 Khan, 29, raised eyebrows across the boxing world earlier this year after announcing his May 7 fight at the T-Mobile Arena against Alvarez, the hard-hitting 25-year-old from Guadalajara.

It represents a risky move for Khan, who has never previously fought above the welterweight limit of 147 pounds (66.7 kilogrammes). Alvarez is the overwhelming favourite with most oddsmakers.

Khan, however, who is now based in San Francisco with trainer Virgil Hunter, believes facing an opponent as challenging as Alvarez can bring out the best in him.

"Obviously we don't want to walk into a fight and get hurt," said Khan, who is 31-3 since turning professional after winning a silver medal at the 2004 Athens Olympics at the age of 17.

"By me taking this fight, I will be more focused. I know I can't make mistakes against this guy," Khan said in a conference call.

"I've made mistakes in the past at other weights because I thought I was more gifted than them, I knew I was more skilled and a better fighter than them guys. They can be my worse opponents because I don't really have that fear element.

"But when you're fighting someone who is tough, dangerous it is going to be a tough fight and that is what brings my 'A' game out."

Khan is unbeaten in five fights, with the last of his three defeats a fourth round technical knockout by Danny Garcia in 2012.

The Briton boxer said that being an underdog against Alvarez will suit him, confident that his hand speed and elusiveness can help against a naturally stronger opponent.

"I know I'm not going to be stronger than him," Khan said.

"It's the first fight I'm walking into as the underdog and that's good. Because I can prove to people that this is where I belong." Khan's trainer Hunter meanwhile confessed he was reluctant to accept the bout when it was first made.