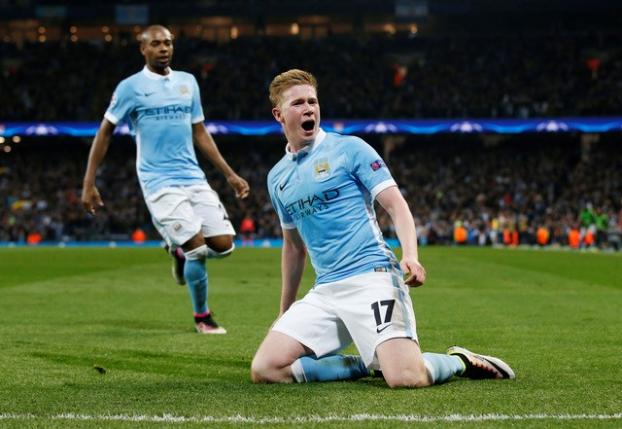 Manchester: Manchester City's season began to unravel when Kevin de Bruyne missed 10 matches with a knee injury but as he showed when he scored against Paris St Germain on Tuesday, anything is possible with him back in the team.

The 24-year-old Belgium international forward scored with a brilliantly-manufactured 76th minute curling shot from the edge of the box to give City a 1-0 win over the French champions to reach the Champions League semi-finals for the first time.

The goal secured their 3-2 aggregate success, sent the Etihad Stadium crazy with delight and earned him the headlines on Wednesday morning with the Manchester Evening News anointing him "King Kev", while the Daily Mail hailed him as "Special K".

There has only been one "King Kev" in English soccer -- former European Footballer of the Year Kevin Keegan back in the 1970s and 1980s -- but if De Bruyne achieves anything like the success Keegan enjoyed, he will deserve that title.

The Belgian turned down PSG to join City for a club record fee of 55 million pounds ($78.29 million) from VfL Wolfsburg last August, and is one of the gifts waiting to be unwrapped when Pep Guardiola takes over as City coach from Manuel Pellegrini next season.

Guardiola, whose Bayern Munich side could yet face City in this season's competition, is expected to re-shape and overhaul the squad when he arrives, but the ever-improving De Bruyne will doubtless be central to the new coach's plans.

After making that transfer fee look like something of a bargain with his third goal in four matches -- including one in the first leg against PSG last week -- since returning to the side earlier this month after two months out, de Bruyne sent out a defiant message to everyone, including Guardiola.

"We are not done yet. It is two games to the final, so we will be doing everything we can to get through," he said.

"This has been a season of ups and downs but in the Champions League we have gone from down to up. The performances have been good and hopefully we can go all the way."

Both City and PSG have been enriched by Arab billions in the last few years and both sides have come to the fore in their domestic leagues following massive investment after decades of under-achievement.

Although City have already won the League Cup this season and are in fourth place in the Premier League, their ageing side fell away badly in the title race while De Bruyne was out.

Although the Premier League title has gone, the greater prize of European glory remains and Pellegrini praised the player who kept that dream alive after the match.

"Kevin is a very important player for us. He is a very dangerous player, he does not need much space to get his shots in and good players always make a difference."

According to Pellegrini, City are now among the top four sides in Europe, and, revitalised by De Bruyne, there is no telling what might happen next.