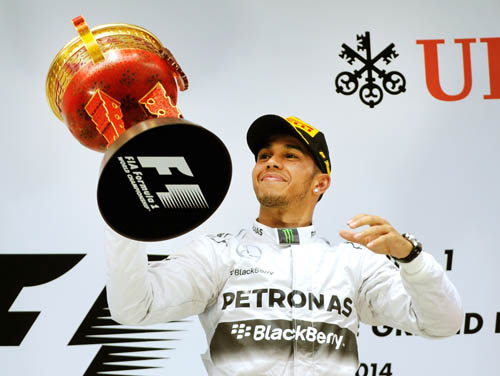 SHANGHAI: Lewis Hamilton has had more success in Shanghai than any other Formula One driver, which makes Sunday’s Chinese Grand Prix the ideal location for the triple world champion to end Mercedes team mate Nico Rosberg’s winning streak.

While Rosberg has started the season with a perfect 50 points from two races, and a run of five successive victories dating back to last November, Hamilton is ready to turn the tables.

The Briton has won four times in Shanghai and is on for three in a row after last season becoming the only driver to win the race in successive years.

“It’s not been a smooth start to the season for me, so to be in the championship position I’m in right now is actually pretty positive,” said Hamilton, who lies second in the standings after a second and a third place.

“Now we go to China for the next battle. It’s a track that’s been good to me over the years... so hopefully this race can be the turning point.”

Hamilton has not won since he took his third world championship in Austin, Texas, last October but the 31-year-old has started both races this season on pole position.

The decision to abandon a failed new live elimination qualifying format and revert to the 2015 version from Shanghai onwards is unlikely to make much difference to Mercedes’ domination of the Saturday session.

While Hamilton is still the bookmakers’ favourite, Rosberg has reasons of his own to be confident.

His first Formula One victory came in Shanghai in 2012 and he stands on the cusp of history with only three other drivers ever putting together a run of six or more wins in a row – two of them also Germans.

Sebastian Vettel managed nine with Red Bull in 2013 and Michael Schumacher seven with Ferrari in 2004. The other was Italian Alberto Ascari in the 1950s.

Mercedes have won the last eight races but Hamilton, 17 points behind Rosberg, is not the only threat to the championship leader.

Rivals Ferrari have yet to show their true pace, and might have won earlier without mishap, but Vettel and Kimi Raikkonen can count on plenty of local support in a country where red is a lucky colour.