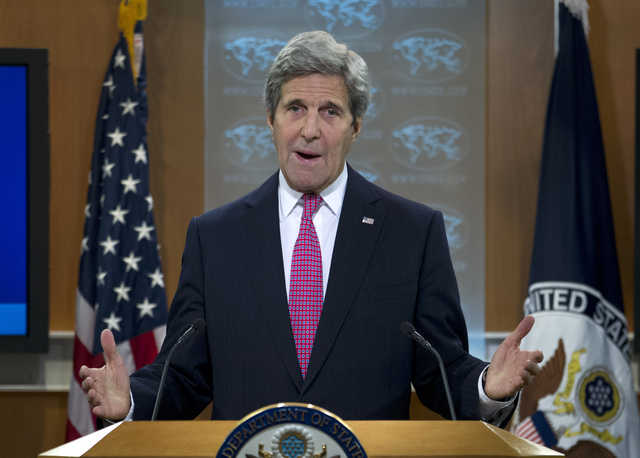 Governments around the world are cracking down on basic freedoms, the US warned Wednesday, in a report that did not spare key US allies like Turkey and Egypt.

The report complained that Washington's main global rivals Russia and China are cracking down on civil society and pro-democracy groups.

But it also pointed the finger at some US partners, with language that can be expected to rile several authoritarian leaders.

"The norms referred to in these reports are universal norms," Kerry said. "They are not some arbitrary standard of the US which we seek to impose on people.

"These are universal standards of human rights that have been adopted and accepted and are agreed to by most nations in the world," he said, at the launch of the report.

Kerry argued that respecting human rights does not weaken a government and that repressing citizens opens the door to the growth of violent extremism.

"The government that fails to respect human rights, no matter how lofty its pretensions, has very little to boast about, to teach," he argued.

The report, compiled on a country-by-country basis by US diplomats, has no legal implications for US policy.

A critical writeup does not compel Washington to cut ties or military aid to rights abusers or to impose sanctions upon them.

But Kerry argued that the detailed report – the 40th his agency has produced – would strengthen US determination to promote what he called fundamental freedoms.

"Some look at these events and fear democracy is in retreat," he said, writing in the preface to the report.

"In fact, they are a reaction to the advance of democratic ideals, to rising demands of people from every culture and region for governments that answer to them."

As might be expected, the report is critical of US rivals like Russia and China – where it says civil rights groups face increasing repression – and of foes like Iran and North Korea, where citizens face extrajudicial killings and torture.

Tom Malinowski, assistant secretary of state for democracy, human rights and labor, said Moscow and Beijing's crackdowns on dissent sent a bad message to other powers.

Referring to Moscow's attempts to close or control civil society groups, Malinowski said "we see determined efforts to legislate and end to freedom of association."

He complained that Moscow treats Russians campaigning against torture or for free elections as if they are traitors and that Chinese law conflates peaceful activism and journalism with terrorism, through legislation.

"That is of particular concern because those practices are much more likely to be copied in other countries," he said.

But the report also paints a grim picture of the situation in some allied countries, including Nato member Turkey, where President Recep Tayyip Erdogan's government has cracked down on opposition media and arrested several leading journalists.

"The government has used anti-terror laws as well as a law against insulting the president to stifle legitimate political discourse and investigative journalism," the report says.

It accuses Turkey of "prosecuting journalists and ordinary citizens and driving opposition media outlets out of business or bringing them under state control."

And, while denouncing the violence of the "PKK terrorist group," the report accuses Turkish security forces of excesses of its own, citing "credible allegations that the government or its agents committed arbitrary or unlawful killings."

The report will anger Erdogan, who visited Washington last month and denied that there had been any crackdown on free expression in his country, even as his security detail tried to expel opposition journalists from the think tank hosting his speech.

"There were instances of persons tortured to death and other allegations of killings in prisons and detention centres," the report says, citing reports from rights groups and the UN that hundreds of Egyptians have gone missing since the 2011 revolution.