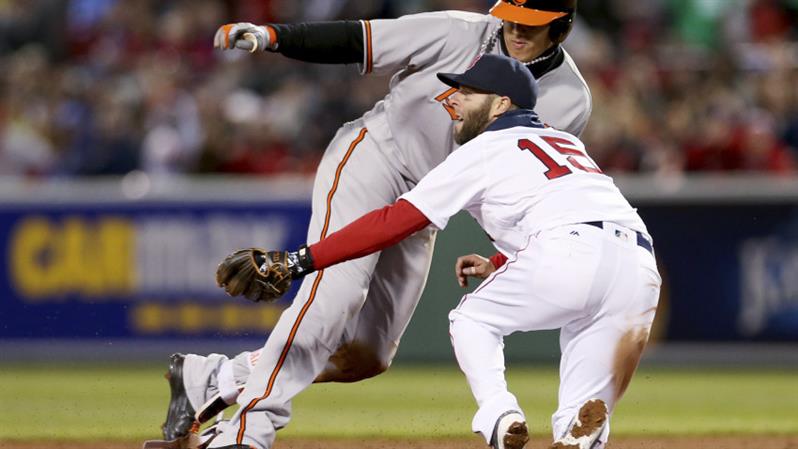 Red Sox starter Joe Kelly struggled through five innings but combined with five relievers as the Red Sox snapped a three-game losing streak to salvage the final game of their opening home series of the season and pull even at 4-4.

Kevin Plawecki's two-run single snapped a scoreless tie in the seventh inning and the New York Mets went on to edge the Miami Marlins.

The win salvaged the finale of a three-game series and ended the Mets' four-game losing streak. New York entered the game last in the National League in runs scored.

The Marlins pulled within a run in the top of the eighth when Christian Yelich chased Blevins with a one-out single.

Kole Calhoun had three hits and drove in two runs as Los Angeles beat Oakland to complete its first road sweep against the A's since 2012.

Albert Pujols drove in two runs and Andrelton Simmons also had an RBI for the Angels, who have a four-game winning streak after a 1-4 start to the season. Mike Trout added three hits and scored three times.

Matt Shoemaker rebounded from a poor outing with six shutout innings and improved his road record to 14-5. He gave up a hit, walked three, struck out five and did not allow a runner past second.

Dae-Ho Lee smashed a pinch-hit, two-run homer in the 10th inning to lift the Seattle Mariners to victory over the Texas Rangers.

Tanner Roark pitched seven shutout innings and Stephen Drew and Jayson Werth hit their first homers of the season in the fourth inning as the Washington Nationals beat the winless Atlanta Braves.

The Braves are now 0-8 this season and have lost their last 13 games at Nationals Park.

Maikel Franco homered and drove in both runs for Philadelphia, which won for the fourth time in five games.

Eickhoff (1-1) allowed four hits while striking out nine. He didn't walk a batter.

Cleveland starter Carlos Carrasco took a one-hitter into the eighth inning, striking out eight hitters and walking one during the Indians' win over the Tampa Bay Rays.

It was the first win of the season for the right-hander, who pitched on six days' rest after two postponed games and a planned off-day on the Indians' schedule.

The Blue Jays (4-5) pulled away with a four-run eighth to gain a split of the first two games with the Yankees (4-3) and the rubber match of the three-game set will be played on Thursday.

Mark Teixeira homered for the Yankees.

Jarrod Saltalamacchia hit a grand slam for his 100th career home run, and Shane Greene pitched six strong innings in his first start since undergoing shoulder surgery last August to lead the Detroit Tigers to victory over the Pittsburgh Pirates.

Saltalamacchia connected off Arquimedes Caminero (0-2) with two outs in the sixth inning, hitting a drive into the right field bleachers that enabled the Tigers to erase a 2-1 deficit.

Detroit loaded the bases on a double by Miguel Cabrera, a walk to J.D. Martinez and Nick Castellanos' single.

Domingo Santana's first homer of the season snapped a 4-4 tie in the top of the ninth inning and gave the Milwaukee Brewers a 6-4 decision over the St. Louis Cardinals.

The right fielder cranked an 0-1 fastball from reliever Trevor Rosenthal (0-1) 440 feet into the seats in deep right-centre, scoring pinch-hitter Kirk Nieuwenhuis, who drew a two-out walk.

Closer Jeremy Jeffress worked the ninth for his fourth save as Milwaukee (4-4) snapped St. Louis' four-game winning streak, dropping the Cardinals to 4-4.

Jerry Sands hit a two-run homer and Carlos Rodon pitched six shutout innings to lead the Chicago White Sox to a 3-0 win over the Minnesota Twins.

Rodon allowed three hits and walked five while striking out six in winning his first game of the season. The left-hander has allowed two earned runs and 10 hits with 12 strikeouts in 13 innings in his two starts in 2016.

Minnesota dropped to 0-8 on the season and is the only team in the American League without a win. No other AL team has fewer than three wins.

Jorge Soler went 2-for-2 while Jason Heyward and Kris Bryant each collected two RBIs as the Chicago Cubs scored early and often in a victory over the Cincinnati Reds.

Wednesday's game -- only the second at home for the Cubs -- was played in brisk conditions with a first pitch temperature of 43 degrees and the wind blowing in.

Reds starter Alfredo Simon (0-1) lasted two-thirds of an inning after allowing five runs in his second start of the year.

Salvador Perez blasted a two-out, two-run home run in the eighth inning, breaking a tie and leading the Kansas City Royals to victory over the Houston Astros.

The Royals won for the fourth time in five games.

Perez took a 1-2 pitch from Ken Giles (0-1) over the left-centre-field wall after the Astros reliever walked Alex Gordon.

Earlier in the game, Perez lifted a sacrifice fly that scored the Royals' second run. He boosted his season RBI total from one to four.

Nolan Arenado led an extra-base barrage and had a career-high seven RBIs for the Colorado Rockies as they beat the San Francisco Giants.

Arenado went 4-for-5 with two homers and finished a triple shy of the cycle while continuing to punish the Giants. Last season, Arenado hit 10 homers with 24 RBIs against them.

The Rockies unloaded a franchise-record tying 12 extra-base hits and subjected Giants starter Jake Peavy to most of that damage. He worked four innings and allowed six runs on 11 hits, including six doubles, three triples and a homer.

Alex Wood retired 11 of the final 12 batters he faced as the Los Angeles Dodgers defeated the Arizona Diamondbacks.