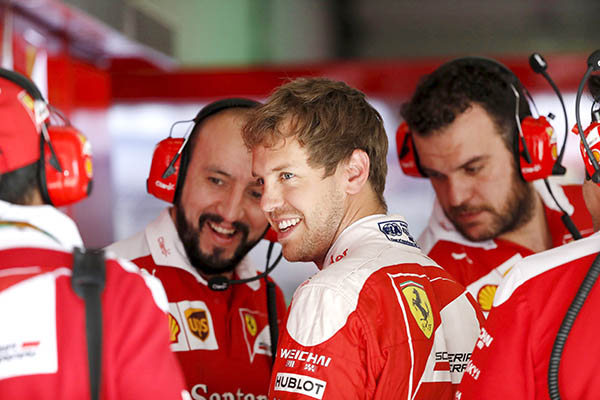 Vettel arrives at his garage during the first practice session

SHANGHAI: Kimi Raikkonen set the pace ahead of Sebastian Vettel in yesterday’s practice for the Formula One Chinese Grand Prix as the Ferrari pair dislodged the dominant Mercedes duo.

Finn Raikkonen, a former winner for Ferrari in China, jumped to the top of the order with a one minute 36.896 second lap in the second session, beating German team mate Vettel by 0.109 seconds.

Ferrari were tipped pre-season to challenge Mercedes’ two-year dominance and the Italian team desperately need a trouble-free weekend if they are two live up to that promise after suffering reliability issues in the season’s opening two races.

Raikkonen and Vettel initially appeared to be struggling, with the Finn in particular repeatedly complaining over the radio about his car’s handling.

But the duo turned the tables on their German rivals in the afternoon with their runs on the fastest, red-walled, super-soft compound tyre, making that session just the second time this season that a Mercedes has not finished at the top.

“It’s been quite a tricky day,” Raikkonen said.

“I don’t know if it’s the conditions or the wind or something but I was sliding a lot and obviously not feeling very nice.

Team mate and world champion Lewis Hamilton, who heads into today’s qualifying session with a five-place grid penalty for a change of gearbox, was fourth, 0.433 seconds adrift.

Rosberg had set the fastest time ahead of Hamilton in yesterday morning’s interrupted opening session and Mercedes head into qualifying and the race as favourites, despite Ferrari’s session-topping efforts.

The German team have won 34 of the last 40 races and started the last eight on pole.

Rosberg, who leads the standings by 17 points from Hamilton, heads into Sunday’s race gunning for his sixth straight win, while the Briton is aiming to complete a hat-trick of Chinese Grand Prix victories.

Hamilton, who has the most wins of anyone in China, however will have his work cut out as the highest he can start the race from is sixth.

“It wasn’t a bad day but it wasn’t a spectacular day,” said Hamilton, who spun twice in the morning session at the Shanghai circuit’s turn 11.

“Ferrari are quick, which means we’re going to have a race which is exciting.

“Seems that we’re going to have a bigger fight than we ever have,” said Hamilton.