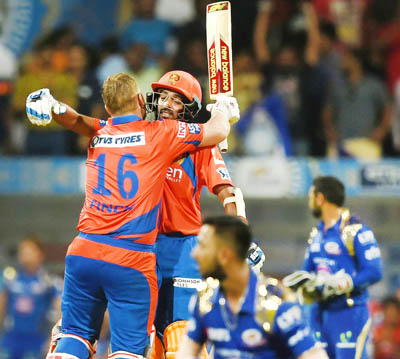 NEW DELHI: Gujarat Lions continued their impressive start to the ongoing Indian Premier League last night with their third successful chase in a row, this one the toughest of the lot owing to the way Mumbai Indians fought trying to defend a total of 143 for eight.

Once again, leading the way was Aaron Finch, whose unbeaten 67 was his third consecutive fifty in the tournament and his grittiest yet. Dropped on four in the first over of Gujarat’s chase, Finch hung on while Mitchell McClenaghan prized out two wickets in the penultimate over of the game and, with the scores levelled, hit the boundary that clinched a thriller.

Subtract Finch’s excellent innings and Gujarat would have lost. It is that simple.

How Rohit Sharma will rue his team not having more runs to defend.  That MI even got to 143 owed in plenty to an eighth-wicket partnership of 42 of 17 balls between Tim Southee and debutant Krunal Pandya – which in itself speak of the wobbly batting that preceded them.

Following his batting heroics, Southee created a chance in the opening over of the chase but Jos Buttler could not hold onto the chance. Hardik Pandya made no such mistake at point, intercepting a fierce slap from Brendon McCullum off a Jasprit Bumrah full toss, and MI had found an opening.