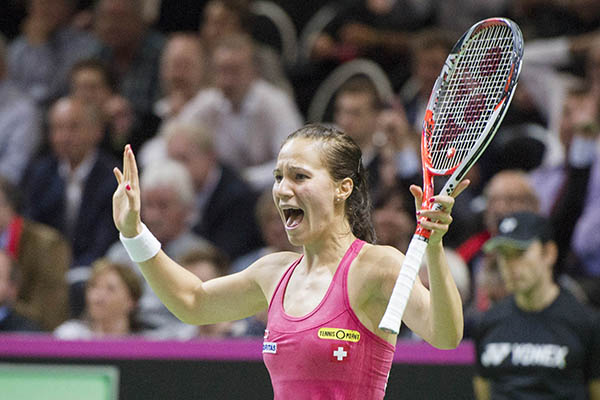 Golubic celebrates her win against Pliskova

Paris: Fightbacks from Switzerland against holders Czech Republic and France against the Netherlands left the Fed Cup semi-finals on a knife edge yesterday.

Barbora Strycova got the Czech Republic off to a winning start in Lucerne, demolishing world number 17 Timea Bacsinszky 6-0, 6-2 in 65 minutes.

It was a first Fed Cup win for 33rd-ranked Strycova who had lost all three of her previous singles ties in the competition.

And it left the Swiss facing a tough battle as they bid for a first Fed Cup final appearance since 1998.

But Viktorija Golubic levelled with a 3-6, 6-4, 6-4 defeat of Karolina Pliskova to leave the tie wide open at 1-1 ahead of today’s concluding reverse singles and doubles.

“It’s an incredible feeling! I was nervous in the beginning, but then I felt the public’s support!” Golubic posted on Twitter.

The hosts had suffered a blow as Swiss number one Belinda Bencic pulled out of the tie with a back injury.

The Czechs are aiming for a fifth title in six years.

In Trelaze, hosts France were trailing after Kiki Bertens saw off Caroline Garcia 6-4, 6-2 in the opening rubber in the western town.

She increased the pressure in the second to wrap up the tie after one hour and 11 minutes at the Arena Loire, to notch up her 14th win for just one singles defeat in Fed Cup.

“I think the key to my success was to serve well,” said Bertens. “On my first service game I was 0-40, but I hit two aces and from that moment I gained in confidence.”

But taking a leaf out of the Swiss book France dug deep and got themselves back level at 1-1 thanks to Kristina Mladenovic’s 6-2, 6-4 win over Richel Hogenkamp.

In the pair’s first meeting Mladenovic – ranked more than 100 places higher than her Dutch opponent – produced some powerful ground strokes to put Hogenkamp on the back foot in the opening set.

Hogenkamp fought back in the second set, but to no avail.

“We’d prefer obviously to be leading 2-0 but it’s a scoreline that’s fair.”

She added she would be considering the options for Sunday’s line-ups.

France are chasing a first finals appearance since 2005 and had gone into their tie on clay as heavy favourites against surprise semi-finalists the Netherlands.

“I think we’ve still got a good chance.”