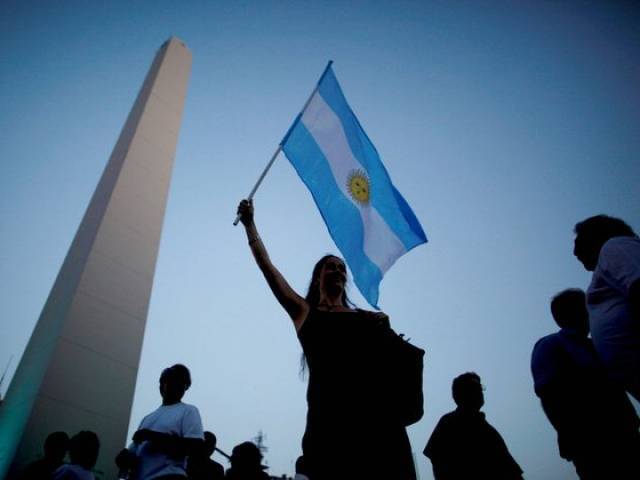 Buenos Aires: Argentina seeks to end 15 years of financial isolation on Monday when it sets out to borrow cash on international credit markets for the first time since a 2001 default.

The country is looking to boost its struggling economy and settle a 15-year lawsuit by US investment funds which its ex-president Cristina Kirchner branded 'vultures.'

"It serves partly to pay the vulture funds, to finalize an agreement with the remaining creditors, and to give the government room to maneuver to restart the country's economy."

Economist Marina Del Poggetto warned however that the country will also have to lower its public deficit, currently six percent of output, and strengthen the economy.

"In the long term, it will have to correct imbalances because going into debt is not a strategy in itself," Del Poggetto said.

Now that a US court has cleared the way for Argentina to start borrowing again, the government plans to issue up to $15 billion in bonds on Monday and Tuesday.

The court ruling was seen as a victory for Conservative President Mauricio Macri.

He has been scrapping Kirchner's protectionist policies and opening up Argentina's diplomatic and financial ties.

He has lifted currency controls and raised utility prices, generating angry protests by Argentines who say their spending power is declining.

South American countries generally borrow at 3.0 to 4.0 percent interest, but analysts forecast Argentina would have to offer a higher rate in its new bond issue.

Edward Glossop, an analyst at research group Capital Economics, estimated it would have to offer investors a yield of between 7.0 and 9.0 percent.

"The issuance of external debt is likely to have a significant impact on the economy over the medium term," he said.

But after the 2001 crisis, some Argentines object to taking on new debts, not least Cristina Kirchner and her allies.

"Once again history is repeating itself and catching the Argentines out. Debt, devaluation, layoffs, political persecution, price rises," Kirchner said in a speech this week.

"These are just a few of the calamities that the new government has caused in barely four months."

Her former economy minister Axel Kicillof said the new debts would be followed by further painful public spending cuts that will affect the poorest Argentines most.

"Paying off the vultures without a word is just the first condition for the foreign banks to lend Macri the money he needs. Then they'll be suggesting a rescue program from the International Monetary Fund," he said.

"The Fund makes sure the country's resources aren't used for social welfare and that all its assets are sold to pay the debts."

Argentina did not borrow in the 12 years under Cristina Kirchner and her late husband and predecessor Nestor, Estrada said.

Excluding the previous debt to the holdouts, it lowered its debts thanks to high prices paid for its commodity exports, which have since fallen.

Getting access to Latin America's third-biggest economy is an appetizing prospect for foreign banks.

The finance ministry said it has enlisted Deutsche Bank, HSBC, JP Morgan, Santander, BBVA, Citigroup and UBS to organize the bond sale on Monday and Tuesday.

But it has included a clause to prevent a small number of shareholders blocking the restructuring of the debt.

That is a measure to avoid a repeat of Argentina's fight with the holdouts.

It still ranks as a speculative investment with a "high credit risk," but less high-risk than before.