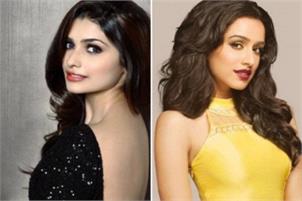 Prachi Desai, left, says reports that she did not get along well with her 'Rock On 2' co-star Shraddha Kapoor are completely "ridiculous". (PTI Photo)

Mumbai: Actress Prachi Desai says reports that she did not get along well with her 'Rock On 2' co-star Shraddha Kapoor are completely "ridiculous".

While Prachi also starred in the first part of the hit musical-drama, the 'Ek Villain' actress is new addition to the ensemble.

"These reports are completely ridiculous. We both shared a great rapport and got along really well. I am sure she will laugh about this when she hears this too," Prachi told PTI.

There were reports that the 27-year old actress was not too comfortable shooting with Shraddha for the sequel.

"I assume when people have nothing to do, when they run out of ideas, they start these rumours. But they don't affect me at all. We all had a great time shooting and are friends. Sure, we don't meet often because of our schedule but the bond remains intact."

Prachi, who made her Bollywood debut with 'Rock On' in 2008, feels being part of the sequel was a special experience.

"I did 'Rock On' when I was a 19-year-old. To come back to the series, and meet everybody was extremely special. Over the years all of us who were in the film have evolved as actors and individuals. There was this strange bonding between us," said the 'Once Upon A Time In Mumbai' actress.

She says the film will live up to the expectations of the fans of the franchise.

"It is not a conventional sequel, it is something which you haven't seen before. This has a very strong storyline and I am sure the fans won't be disappointed."

Prachi will be next seen in 'Azhar" which releases on May 13.