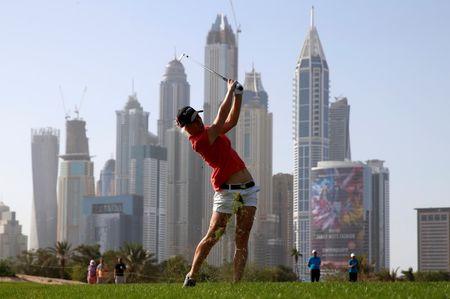 Melissa Reid of England hits the ball at the 13th hole during the third round of the Dubai Ladies Masters golf tournament in Dubai, United Arab Emirates, December 11, 2015. (Reuters Photo)

London: European Solheim Cup player Melissa Reid believes Olympic organisers missed a trick by not opting for a mixed matchplay event when golf returns to the Games in August following a 112-year absence.

The 28-year-old Briton says the players would have preferred a different format to the separate men's and women's 72-hole strokeplay competitions scheduled for Rio de Janeiro.

"I just wish they would have done it in a matchplay situation," Reid told Reuters in an interview held at Woburn, home of the Ricoh Women's British Open from July 28-31.

"If it all goes well this year hopefully they will think about re-doing the format.

"Us players would love to play with the guys and to have something like a mixed matchplay would be amazing and I know that certainly all the players feel that."

Reid, a member of the European team narrowly beaten by the United States at the Solheim Cup in Germany last year, is nonetheless excited at the prospect of going for gold in Rio.

First, though, she needs to concentrate on working her way up the rankings.

Each team will contain two players and Reid, who is 92nd in the world, needs to overhaul 70th-placed Catriona Matthew in order to replicate her Solheim pairing with fellow Englishwoman Charley Hull (25) in Britain's Games lineup.

"I'd love to be a part of the Olympics," said the part-time snowboarder and soccer player. "I pride myself on being a bit of an athlete and to be part of something as special as the Olympics would be the highlight of my career.

"I'm going to have to play quite well in the next few tournaments to give myself an opportunity to get in. I have to try and overtake Catriona but it would be amazing to be a part of the Olympic village and everything like that."

Reid, a five-times winner on the Ladies European Tour, never imagined as a youngster that there might one day be a chance to drape a gold medal around her neck.

"Growing up I never thought about the Olympics, it was all about winning British Opens and U.S. Opens," she said.

"To now have that opportunity is something that certainly drives you. It's very, very exciting."

Reid said golf's Olympic comeback could be just the boost the game needs.

"Look what it has done to cycling, athletics, diving," she added. "If we have a successful Olympics it would be great for our sport.

"We need to get more young kids, and more adults as well, involved in the game. I feel that golf isn't peaking as much as it should," said Reid.

"It's a fantastic sport for people of all ages to be part of and hopefully the Olympics will get people watching who don't normally watch it and think, 'I'll give that a go'."

"I think all women's sport, cricket, rugby, football ... I feel for it to excel the way everyone wants it to, we need to integrate together.

"We need to invite cricket, rugby, football, girls to golf pro-ams, they need to invite us to watch them play and maybe have a little knockabout with them and really promote women's sport as a whole rather than just individual sports," added Reid.

"That is happening a lot more than it used to. We did some work with the England cricket girls last year which was great for both sides. That's the way women's sport needs to be approached to get the exposure that it needs." (Editing by Toby Davis)