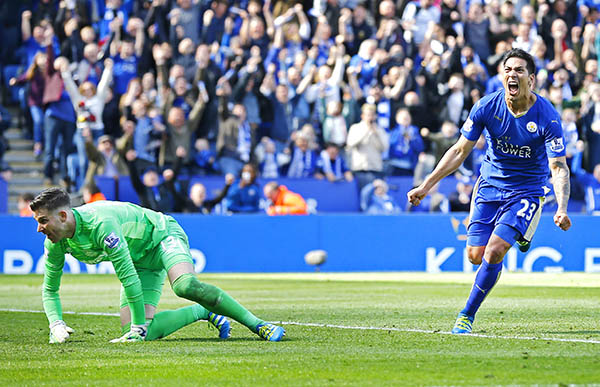 LONDON: Leaders Leicester City salvaged a point with a penalty from the last kick of the game to draw 2-2 with West Ham United yesterday and open up an eight-point gap over Tottenham Hotspur at the top of the Premier League.

Although Leicester manager Claudio Ranieri praised his team’s “fantastic” performance built on “blood, heart and soul”, the match proved costly for the side bidding for their first English top-flight title.

Goalscorer Jamie Vardy was sent off early in the second half and he will be suspended for the next match against Swansea City and they dropped points for the first time after five straight wins.

Leicester lead the standings with 73 points from 34 matches, followed by Spurs who have 65 from 33 and play their game in hand at Stoke City today.

Victory over West Ham and defeat for Spurs today would have left Leicester 10 points clear with four games to play and there was a fantastic atmosphere at the King Power Stadium with thousands of Leicester fans arriving in the spring sunshine hours before kickoff.

Two minutes into the game, however, Leicester were lucky not to be behind when a West Ham attempt hit both posts before being cleared.

Leicester took the lead through Vardy after 18 minutes with the striker grabbing his 22nd goal of the season to join Harry Kane of Spurs as the league’s leading scorer.

But Vardy was red-carded for a second yellow early in the second half by referee Jon Moss and although Leicester’s 10 men coped well with constant West Ham pressure, they wilted in the 84th minute when Wes Morgan fouled Winston Reid and Andy Carroll equalised from the spot.

Two minutes later West Ham were ahead thanks to a fierce shot from the edge of the penalty area from Aaron Cresswell, before Carroll fouled Jeffrey Schlupp and Moss awarded Leicester a penalty which Leonardo Ulloa converted.

“The sending off changed our match,” Ranieri said. “But I never speak about the referee.

“Our performance was fantastic, this is our soul, we play every match with this, blood, heart and soul, it was magnificent. This point is very important psychologically.”

Arsenal’s lingering title hopes appeared to end after they were held to a 1-1 draw at home by Crystal Palace who equalised eight minutes from time when Yannick Bolasie sent a low shot from the edge of the box past Petr Cech.

Liverpool, showing 10 changes from the side that beat Borussia Dortmund 4-3 to reach the Europa League semi-finals, won 2-1 at Bournemouth with their goals coming at the end of the first half from Roberto Firmino and Daniel Sturridge.

Josh King scored a late consolation for the hosts.