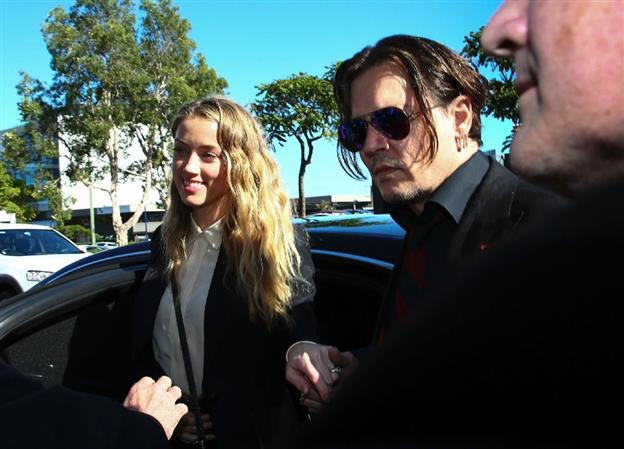 Two charges of illegally importing terriers Pistol and Boo last May were dropped in the Gold Coast court, but Heard admitted a third charge of providing a false document.

A black limousine dropped the actress and Hollywood star Depp at Southport Magistrates' Court in Queensland state amid a media scrum, an AFP photographer said.

Heard has given the court a video clip of her expressing ‘remorse’ over the case, the Australian Broadcasting Corporation reported.

Twelve witnesses were listed to give evidence but it was unclear if Depp would be called on.

The hearing was set to continue later on Monday after a brief adjournment.

Following the incident, Heard had vowed never to return to Australia but the couple flew in to the Gold Coast unnoticed early on Sunday.

The case sparked global attention after Agriculture Minister Barnaby Joyce, who has since added deputy prime minister to his portfolio, threatened to have the dogs put down unless they ‘buggered off back to the United States’.

The animals -- flown by private jet to Queensland, where Depp was filming ‘Pirates of the Caribbean: Dead Men Tell No Tales’ -- were quickly whisked out of the country as the story hit the headlines.

Under strict laws designed to keep disease at bay, dogs entering Australia from the United States must be declared and spend 10 days in quarantine.

Penalties for contravening the Quarantine Act range from fines to a maximum of 10 years in prison for the worst cases.