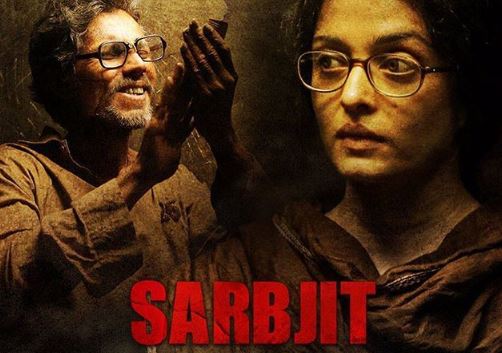 Sarbjit Singh's tragic story was crying out to be told on the big screen. It has everything in it to serve the cause of an intense human drama. Alas, in director Omung Kumar's hands, it peters out into a rather contrived and unconvincing tale ruined by gratuitous theatricality.

Apart from the film's shrill tone, what works against Sarbjit is the casting of Aishwarya Rai-Bachchan in the role of the eponymous character's sister, Dalbir Kaur, a gutsy woman who moved heaven and earth to call the world's attention to her brother's plight in a Pakistani prison.

Neither physically nor in terms of how she delivers her lines does the lead actress look cut out for the part.

The focus of the film is as much on Dalbir Kaur as on Sarbjit. Owing to the single-dimensional manner in which Aishwarya interprets her character, the film is never allowed to settle into a realistic rhythm.

A more understated approach to a true story already filled with pathos would have made Sarbjit a better film.

Randeep Hooda, in the guise of Sarbjit Singh Atwal, a Punjab farmer who strayed across the border never to find his way back again, makes a strong impression, especially in passages in which he is allowed to underplay the emotions.

Unfortunately, for the most part, the director is bent upon extracting as much noise out of a situation as is possible, which completely ruins the overall impact of the film.

Sarbjit might have made far more sense had the screenplay (by Utkarshini Vashishth) cast a longer and deeper glance at the distraught wife of the man at the heart of the film.

Played ably by Richa Chadda, this resilient woman is pushed to the background with the obvious intention of letting the biggest name in the cast hog all the limelight.

Chadda, on her part, grabs the opportunity offered by the couple of scenes that she has to herself and shows why she is one of Bollywood's most natural actresses today.

Darshan Kumar, too, has a significant role in Sarbjit, that of a Pakistani lawyer who defies public opinion in his country to defend the alleged spy and terrorist in court.

Sarbjit Singh was a victim of the history of violence that has defined relations between India and Pakistan for seven decades, but the film simply does not have the subtlety and precision to capture the complexities of regional geopolitics.

It goes hell for leather instead to project Aishwarya's persona and slips up miserably in the bargain.

The crucial scenes in the film stem clearly from the imagination of the screenwriter and the director as there is little documented material available on how Sarbjit was treated in Pakistan.

These moments show little regard for realism, with the dialogues bordering on the overtly melodramatic.

In life, it is well known that Sarbjit was denied justice.

The film on him does him no good either. Sarbjit is more trauma than drama.