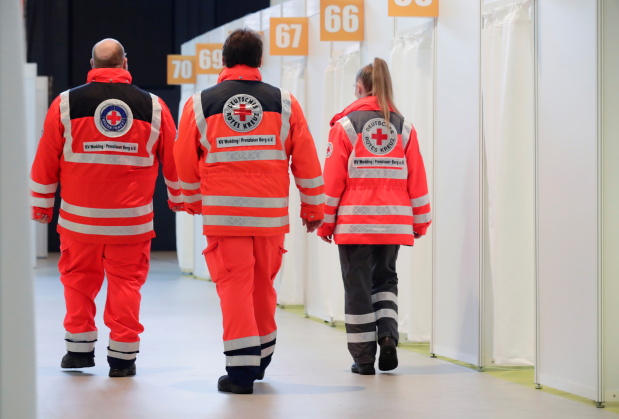 UK cut off over fears about new COVID strain

The United Kingdom stood shut off from the rest of Europe on Monday after allies cut transport ties over fears of a new coronavirus strain, sowing chaos for families, truckers and supermarkets just days before the Brexit cliff edge.

France, Germany, Italy, the Netherlands, Austria, Switzerland, Ireland, Belgium, Israel and Canada were among those that shut off travel ties after Prime Minister Boris Johnson warned that a highly infectious new strain of the virus was a danger to the country.

Johnson will chair an emergency response meeting on Monday to discuss international travel, in particular the flow of freight in and out of Britain. EU officials are due to hold a meeting at 1000 GMT on coordinating their response.

France shut its border to arrivals of people and trucks from the United Kingdom, closing off one of the most important trade arteries with mainland Europe, a step Transport Secretary Grant Shapps said was surprising.

Australia said on Monday it had detected cases of the new fast-spreading coronavirus strain identified in the United Kingdom, while Hong Kong and India said they would suspend flights from Britain.

Two travellers from the United Kingdom to Australia's New South Wales state were found carrying the mutated variant of the virus that Britain has said could be up to 70% more infectious. Both are in hotel quarantine, and the recent spike in infections in Sydney is not linked to this, authorities said.

The new strain has prompted Britain's European neighbours and several others including Canada and Iran to close their doors to travellers from the country.

Much is unknown about the strain, but experts said current vaccines should still be effective against it.

U.S. congressional leaders reached agreement on Sunday on a $900 billion package to provide the first new aid in months to an economy and individuals battered by the surging coronavirus pandemic, with votes likely on Monday.

The package would be the second-largest economic stimulus in U.S. history, following a $2.3 trillion aid bill passed in March. It comes as the pandemic accelerates, infecting more than 214,000 people in the country each day. More than 317,000 Americans have already died.

The package would give $600 direct payments to individuals and boost unemployment payments by $300 a week. It also includes billions for small businesses, food assistance, vaccine distribution, transit and healthcare. It extends a moratorium on foreclosures and provides $25 billion in rental aid.

The European Union has agreed to pay 15.50 euros ($18.90) per dose for the COVID-19 vaccine developed by Pfizer and BioNTech, an internal EU document reviewed by Reuters shows.

The price, which is confidential and was negotiated for a total of 300 million doses, is slightly lower than the $19.50 per shot the United States agreed to pay for a first shipment of 100 million doses of the same vaccine, in line with what Reuters reported in November.

The EU document dated Nov. 18 was circulated internally after the EU announced its supply deal with Pfizer and its German partner BioNTech on Nov. 11.

The EU drug regulator is expected to decide on Monday on approval for the Pfizer vaccine after the shot was authorised in several countries, including Britain and the United States.

South Korea's capital Seoul and surrounding areas banned gatherings of more than four people over the Christmas and New Year holidays as the country recorded its highest daily death toll from the coronavirus on Monday.

The national government has resisted calls to impose a strict national lockdown but the governments of Seoul, Gyeonggi Province and Incheon city ordered unprecedented restrictions on gatherings from Dec. 23 to Jan. 3.

"We cannot overcome the current crisis without reducing cluster infections that are spreading through private gatherings with families, friends and colleagues," Seoul acting mayor Seo Jung-hyup said at a briefing.

"This is the last chance to break the spread."