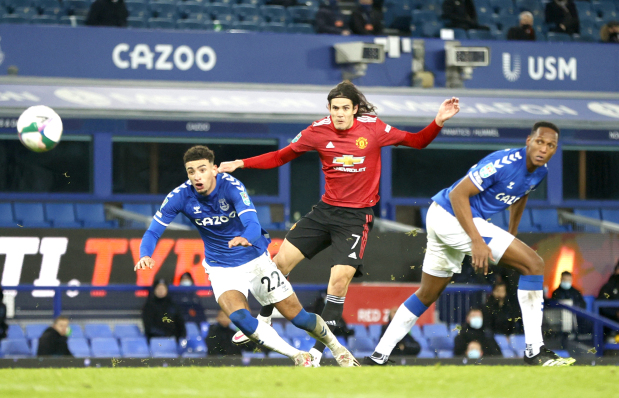 United wasted numerous opportunities in the opening stages and at times the play was dire from both sides as the game appeared to be heading for penalties before Cavani collected the ball on the right wing, skipped inside onto his left foot and fired past Everton goalkeeper Robin Olsen.

Martial added a second with virtually the last kick of the game as the visitors join Championship side Brentford, Manchester City and Tottenham Hotspur in the semi-final draw, with a place in the April 25 final at Wembley up for grabs.

Earlier, Tottenham Hotspur reached the semi-finals with a 3-1 win over second-tier side Stoke City thanks to goals from Gareth Bale, Ben Davies and Harry Kane.

On the sort of inhospitable evening that Stoke’s stadium became famous for in the Premier League, Spurs boss Jose Mourinho paid the now-Championship team the compliment of fielding a strong side from the off including goal-machine Kane.

Chasing a first major trophy since winning the League Cup in 2008, the Premier League side totally dominated the first half and took a deserved lead when Gareth Bale flicked in a cute 22nd minute header from a Harry Winks cross.

It was Bale’s third goal since returning to Tottenham on loan from Real Madrid.

The hosts lacked their famously passionate crowd at the Bet365 stadium, but the chill wind and pre-match rain bore out the old cliche about the toughest test in football being a “cold, wet night at Stoke”.

And indeed, as those few present to watch huddled in their woolies, Stoke brought scowls to Mourinho’s face in the second half with an equaliser by Jordan Thompson, who beat Hugo Lloris from close after Jacob Brown’s pass in the 53rd minute.

Tottenham weathered the mini-storm, however, to restore their lead with a fine low shot from outside the area by Ben Davies in the 70th minute before Kane, inevitably, blasted into the top of the net from close range in the 81st minute.