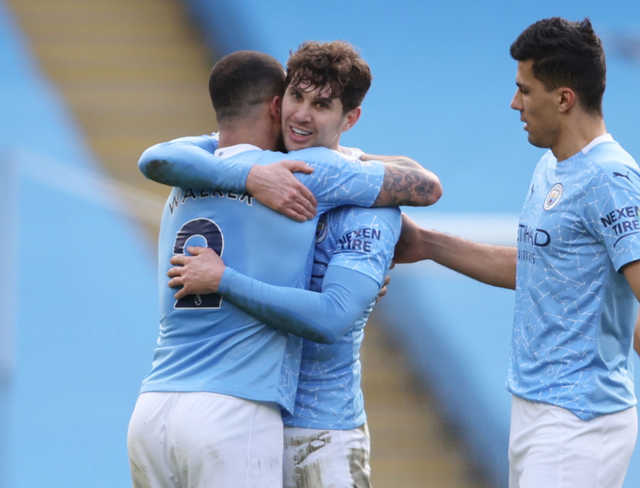 MANCHESTER - Manchester City moved 13 points clear at the top of the Premier League table after a 2-1 win over West Ham United on Saturday - their 20th straight win in all competitions.

City manager Pep Guardiola rotated his side after their midweek trip to Budapest to face Borussia Moenchengladbach in the Champions League but there was no change to their winning habit.

Argentine striker Sergio Aguero made his first start in four months, one of seven changes from the team which won 2-0 on Wednesday, with Kevin De Bruyne also back in the first eleven.

It was no surprise that the Belgian midfielder had a crucial impact, creating the opener in the 30th minute with a curling cross from deep on the right which was firmly headed home by centre-half Ruben Dias.

But David Moyes' Hammers, who have improved so impressively this season, drew level through Michail Antonio two minutes before the interval, the forward tapping home at close range after Jesse Lingard had turned a Vladimir Coufal cross towards goal.

Pep Guardiola's side secured their 14th consecutive league win, however, when in the 68th minute Dias' fellow defender John Stones slotted home after being picked out by a Riyad Mahrez pullback.

Fourth-placed West Ham, who performed well throughout, had a late chance to grab a point, but Issa Diop failed to connect well with a header from a Jesse Lingard cross.

It was more workmanlike than some of the more fluent City displays but Guardiola was content to collect three more points towards what looks set to be a third Premier League title in four years.

"After 10-15 minutes today we realise we are not going to paint anything beautiful. Second half we were much better than the first half. When you play a lot of games, in the league and then the Champions League, this is normal. We were lucky to get all three points," he said.

The win moves City, unbeaten in 27 matches - one short of the club's record - on to 62 points from 26 games, with Manchester United, who play Chelsea on Sunday, behind them on 49 points from 25 matches. Third-placed Leicester are also on 49, four ahead of West Ham, who have their eye on a surprise Champions League spot.

"We came to the best team in the country and possibly Europe and gave them a really good game," said Moyes.

"But you need to take the moments when you get them, and we didn't at the end. But performance-wise, if we keep that up we'll be up near the top," he added.