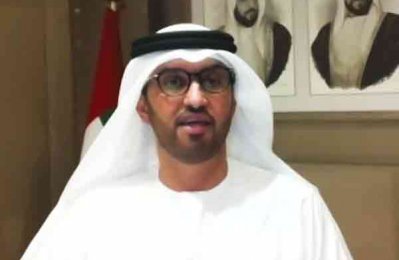 Dr Sultan Ahmed Al Jaber
Low carbon oil will play a central role in the energy transition, said Dr Sultan Ahmed Al Jaber, Minister of Industry and Advanced Technology and Managing Director and Group CEO of the Abu Dhabi National Oil Company (Adnoc).
Speaking at CERAWeek alongside Vicki Hollub, CEO of Occidental, during a virtual panel session, Dr Al Jaber explained that the UAE is uniquely positioned to provide lower carbon oil and gas for as long as the world still relies on hydrocarbons energy, a WAM report said.
"When it comes to low carbon oil and gas, the UAE has a dual advantage; a leadership that has always put environmental protection first, and a natural advantage, because our geology gives us some of the least carbon-intensive oil in the world," Dr Al Jaber said and went on to explain that the UAE has been preparing for the energy transition for over 15 years.
"Rather than shy away from it, we have always seen the energy transition as an opportunity to diversify and develop our economy. As the founding CEO of Masdar, I was closely involved in growing the UAE’s renewable investments, and today, the UAE has three of the largest and lowest-cost solar projects in the world with significant renewable energy projects in thirty countries globally.
"Having said that, we also understand that the world will still need oil and gas for many decades to come, so our mission at Adnoc is to provide that oil and gas as responsibly as possible."
Adnoc is delivering on this mission as it reduces its carbon intensity by a further 25 percent over the next 10 years, Dr Al Jaber said, adding that the company is exploring the potential of new fuels such as Hydrogen, which shows ‘great promise as a close to zero-carbon fuel’ that could be produced at scale as part of Adnoc’s existing hydrocarbon value chain.
"In short, Adnoc will continue to commercialise opportunities that strengthen the UAE’s position at the center of gravity of an integrated energy mix," he added.
Responding to a question on climate change from the moderator of the session, the leading energy economist and Pulitzer-Prize winning author Dr Daniel Yergin, Vice Chairman of IHS Markit, Dr Al Jaber stressed the UAE will continue its role as a regional leader and convener of progressive climate action, building on its record as the first country in the region to sign the Paris Accords.
He highlighted the importance of carbon capture utilisation and storage (CCUS) in the fight against climate change and said Adnoc saw the technology as a ‘game-changer’ when it introduced it in the region four years ago by building the region’s first and largest industrial-scale CCUS facility.
"The truth is, there is no credible way of reaching global climate goals without the widespread adoption of CCS and this goes beyond just the oil and gas industry. In fact, I see an important role for CCS across sectors that are hard to decarbonise and use the most energy such as heavy industry manufacturing and chemicals. And Adnoc is ready to partner with others within and outside our industry to enable wider CCS adoption," Dr Al Jaber continued.
Adnoc can capture 800,000 tonnes of carbon dioxide (CO2) annually through its Al Reyadah facility in Abu Dhabi and is expanding the capacity of this programme to capture 5 million tonnes every year by 2030.
Sharing his perspective on the economic outlook, he expressed optimism and highlighted the dual positive impact of vaccines and stimulus programs from governments.
"With vaccines rolling out around the world, 2021 is looking brighter. Here in the UAE, we have a very proactive vaccination programme. More than six million doses have been administered so far and we are closing in on 50 percent coverage across our entire population – the second-highest rate in the world.
"Vaccination coverage is one of the keys to recovery. The other is economic activity. In response to the pandemic, governments have been quick to unleash stimulus like we have never seen before. There is likely more on the way, and while we should remain vigilant about potential inflationary risks, we should acknowledge leaders around the world for acting quickly decisively.
"Looking regionally, we see that one of the major powerhouses of the global economy, China, has already recovered in GDP (gross domestic product) terms, and is back to robust growth. And we expect another key player in the global economy, the US, to return to its pre-Covid-19 level of GDP this year and continue growing into 2022," Dr Al Jaber noted.
He pointed out the rebound in oil demand has also been robust from last year’s low of around 75 million barrels per day. "Global consumption is currently around 95 million barrels per day and we expect it to rise above pre-Covid-19 levels by the end of this year."
Stressing the need for the oil and gas industry to focus on ‘what we can control’, Dr Al Jaber explained how Adnoc adopted this approach as part of its transformation.
"Over this period, we have focused on improving our performance and enhancing efficiency throughout our operations. For Adnoc, we believe one of the essential enablers for increased efficiency is technology. For example, through technology upgrades to our drilling business, which is the largest in the region, we have driven efficiency gains of more than 35%, enabling substantial cost savings.
"At the same time, we remain focused on capital efficiency by proactively managing our asset and resource base, while attracting top tier global investors to the trusted, business-friendly environment of the UAE. In short, to remain competitive, you have to be a low-cost producer, and we continually focus on ways to enhance our position as one the lowest cost producers in the world," he added.
Taking place virtually from March 1 to 5, CERAWeek 2021 is convening the foremost thought leaders and decision-makers in the fields of energy, technology, business, government, and finance to bring clarity and perspective to the future landscape. -- Tradearabia News Service