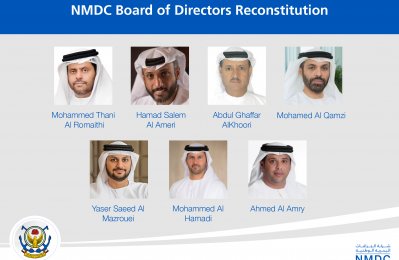 National Marine Dredging Company PJSC (NMDC), one of the leading companies providing dredging, reclamation, and marine construction services in the Middle East, has announced its new board of directors for the next three years with Mohammed Thani Murshed Al Rumaithi as its chairman.
The seven-member board got the approval at the company's annual general meeting (AGM) held yesterday (March 28). This comes following the shareholder vote on December 14, 2020 and also after NMDC  received all required regulatory approvals for the legal completion of its integration with National Petroleum Construction Company (NPCC).
The new board members include Hamad Salem Al Ameri, Abdul Ghaffar AlKoori, Mohamed Al Qamzi, Yasser Saeed Al Mazroui, Mohammed Ibrahim Al Hamadi and Ahmed Amer Al Amry.
All these members have vast industry experience across multiple sectors, including energy and industry. Their extensive expertise will enable NMDC to boost its operations both in the UAE and other major international markets, said the statement from the Emirati company.
The election of the new board also marks the beginning of a stronger entity following NMDC’s integration with NPCC to build an engineering, construction and procurement powerhouse that supports the UAE’s strategy to build world-class infrastructure, it stated.
The combination of NMDC and NPCC (the Combined Group) creates one of the leading integrated oil and gas and marine services EPC players, with an established footprint across Mena and South Asia regions, it added.-TradeArabia News Service