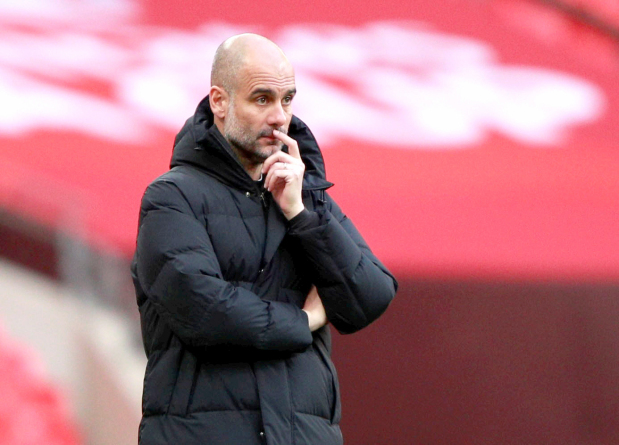 LONDON: When Liverpool were romping to the title last season Manchester City’s Raheem Sterling promised there would be a “massive reaction” from Pep Guardiola’s chastened side and his ominous prediction has proved to be spot on.

A win for City at Crystal Palace tomorrow and defeat for second-placed Manchester United against Liverpool 24 hours later would confirm City’s restoration to the throne with four games of the season remaining.

It would be their fifth Premier League title in 10 seasons and a third in five since Guardiola brought his special brand of football to the Etihad.

Even by his own standards it would complete a sublime week for Guardiola whose team won a fourth-successive League Cup last Sunday, then produced an excellent second-half display to beat Paris St Germain 2-1 in their Champions League semi-final, first-leg on Wednesday.

That performance in Paris put City on the brink of a first Champions League final, and Guardiola in sight of delivering the European crown club owner Sheikh Mansour hired him to deliver.

While next week’s second leg looms large, Guardiola’s immediate focus will be on securing what he described after last weekend’s League Cup triumph as the “most important title”.

A 25th league win of the season at Selhurst Park tomorrow would leave City on 80 points, with neighbours United on 67.

City cannot attain the points totals of their first two Premier League titles under Guardiola (100 and 98) and whatever happens it will be the lowest tally for champions since Leicester City won it with 81 points in 2016.

But statistics aside, in many respects this year’s title charge, played out inside empty stadiums and during the dark lockdown days of winter, might be the sweetest for City.

They were left in Liverpool’s dust cloud last season, surrendering their title by 18 points, and it appeared the balance of power had shifted to Merseyside.

The retaliation, despite a stuttering start to another Covid-19 hit campaign, has been emphatic.

A win at Palace would leave City 26 points better off than Liverpool whose only focus now is to try and make sure they scramble back into the top four.

“The Premier League is the nicest one, the one where I am most proud when we are able to do it,” Guardiola said after last weekend’s League Cup triumph against Tottenham Hotspur.

“We are 10 points clear, we need two victories, and in between the games in this crazy schedule we are going to try to win the next one against Crystal Palace.”

Manchester United manager Ole Gunnar Solskjaer has known the title race was effectively over weeks ago, but the thought of a loss to bitter rivals Liverpool handing the title to City is not one the Norwegian would relish.

However, with United distracted by a Europa League semi-final against Roma, Liverpool will be fired-up for a game in which defeat could leave their hopes of playing in next season’s Champions League in tatters.

Liverpool are in sixth place, four points behind fourth-placed Chelsea whose win at fifth-placed West Ham United last week put them firmly in pole position in the top-four race.

Chelsea can take another big step towards securing fourth place when they host a Fulham side sliding towards relegation tomorrow. West Ham’s dream of finishing in the top four is fading although victory at Burnley on Monday will keep the Hammers in the mix as the season reaches its climax.

Third-placed Leicester can move 10 clear of West Ham when they kick off the weekend away at Southampton tonight.