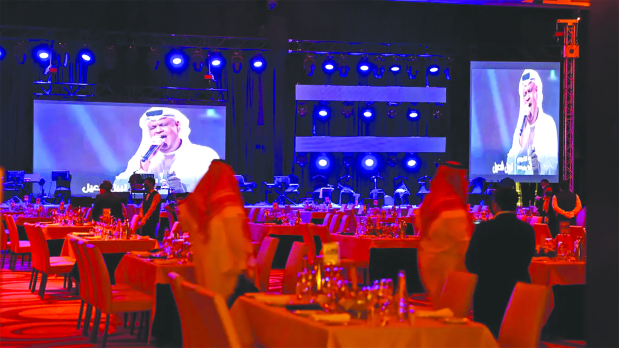 Hundreds gathered for the first concert in the Saudi capital since the start of the Covid-19 pandemic to watch performances by Syrian diva Assala Nasri and Kuwaiti singer Nabil Shuail.

“This is the first concert to take place in Saudi for a very long time,” said one spectator at the concert, held on Thursday in a restaurant of a large Riyadh hotel.

“We are delighted to come from Kuwait to attend the concert,” said a Kuwaiti tourist.

It was not the first concert – Italian tenor Andrea Bocelli sang in April at the ancient Saudi city of Hegra, a Unesco World Heritage site.

Bocelli performed alongside his family members at the site, a long-isolated area seen widely as an open-air museum.

In February 2020, award-winning American singer-songwriter Lionel Richie performed some of his top hits to a sold-out crowd at the Winter at Tantora dfestival, also in Saudi Arabia’s AlUla.

Both performed their songs at the newly created Maraya Concert hall in AlUla, which has already seen Greek pianist, composer and music producer Yanni and Spanish opera legend José Carreras perform to their Saudi Arabian and regional fans.

Saudi Arabia has splurged billions to develop sites like it in an attempt to build a tourism industry from scratch, as part of efforts to diversify its oil-reliant economy.

Saudi Arabia has hosted international musicians – from Janet Jackson to 50 Cent and Korean pop group BTS – for concerts as part of the country’s ambitious push to draw tourists.