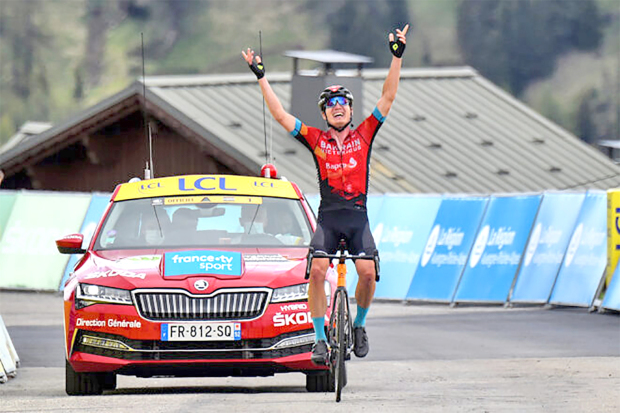 Jack Haig also put in a strong performance finishing fourth on the stage and moving up into the top five in GC.

The Queen stage was set to be a decisive fight in the GC, with the riders taking on 3,980 vertical meters, including two Hors Categorie climbs. An early breakaway formed that included Marco Haller. The breakaway managed to stay away until the final climb, with around 10 kilometres remaining by a reduced peloton.

An attack from Richie Porte (Ineos Grenadiers) sparked the GC fight, but it was Padun who latched onto the move with Seb Kuss (Jumbo-Visma) and Enric Mas (Movistar). Padun and Kuss pushed on, leaving the other two behind. It looked to be a battle between the two, but Padun kicked on one more time, dropping Kuss and riding up solo to take the victory on La Plagne.

“It’s incredible and an incredible moment for me. First of all, it’s my first WorldTour victory and on one of the hardest stages of Dauphine when everyone is going so fast,” Padun said.

“Also, in the last six stages, I felt so bad on the bike during the race, and I thought it would be impossible for me to finish the race, and today I arrived first. When I crossed the finish line, I had the feeling like I need to wake up now, but it’s not a dream.