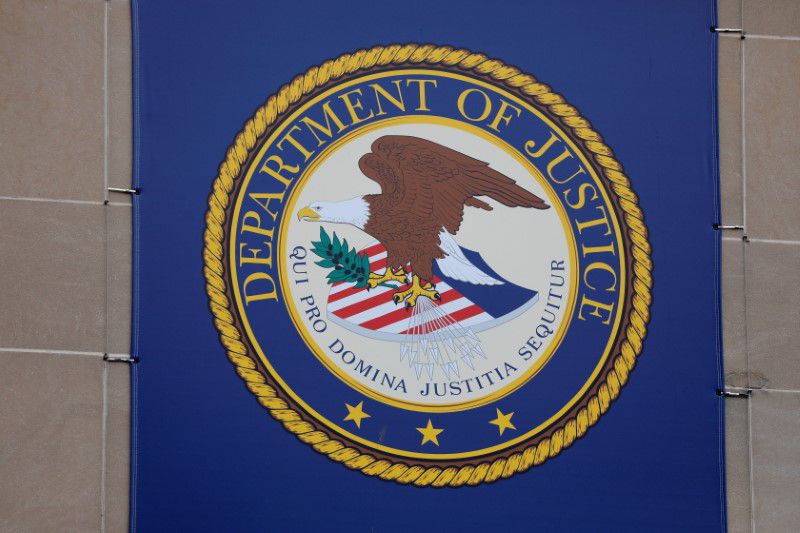 The crest of the United States Department of Justice (DOJ) is seen at their headquarters in Washington, D.C., U.S., May 10, 2021. REUTERS/Andrew Kelly/File Photo

The top two Democrats in the U.S. Congress on Sunday vowed to probe the "rogue" actions of the Justice Department during former President Donald Trump's term, including its move to seize the communications records of Democratic lawmakers.

Those reviews will run parallel with an investigation by the department's own internal watchdog into its moves to subpoena phone records of Representatives Adam Schiff and Eric Swalwell, as part of a probe into leaks of classified information.

The Justice Department under former attorneys general William Barr and Jeff Sessions was regularly accused of putting Trump's personal and political interests ahead of the law.

"The Justice Department has been rogue under President Trump, understand that, in so many respects. This is just another manifestation of their rogue activity," House Speaker Nancy Pelosi told CNN's "State of the Union."

"This was nothing less than a gross abuse of power, an assault on the separation of powers," Schumer told a news conference in New York. "They must testify, Sessions and Barr must testify under oath as part of a formal congressional investigation."

A White House official on Friday criticised the Trump administration actions as "appalling."

During a press conference at the Group of Seven leaders' summit in Britain, President Joe Biden could be seen holding a card with talking points on the issue.

"Trump abused power/Trump DOJ out of control. Now we have to clean it up," the card read, according to images captured by a U.S. network pool camera. "I've made it clear this DOJ will reflect my values and principles and priorities -- not Donald Trump's."

Biden was not asked about the probes during his news conference.

Pelosi said the probe by the department's inspector general, Michael Horowitz, would be important but was not a substitute for a congressional investigation.

Pelosi said it was "beyond belief" for Barr or Sessions to say they knew nothing about it. Barr told Politico on Friday that he had no recollection of any congressman's phone records being subpoenaed.

Pelosi sidestepped a question about whether they would be subpoenaed, saying she hoped the pair would appear voluntarily.

Horowitz's office said on Friday it was launching a review of the department's use of subpoenas to obtain the communications records of both lawmakers and journalists, including whether "improper considerations" drove those decisions.

The New York Times on Thursday reported that the Trump-era Justice Department subpoenaed Apple Inc for data on Schiff and Swalwell.

Apple also told Donald McGahn, a Trump-era White House counsel, that the Justice Department had subpoenaed information about him in early 2018 -- and barred the company from notifying him of the request -- the Times reported on Sunday, citing two people familiar with the matter.