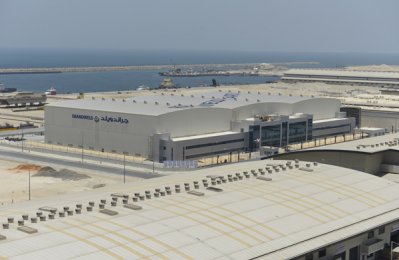 Grandweld shipyard
Stanford Marine Group (SMG), one of the leading offshore services companies in the Middle East, has made significant progress in its revitalised growth plans following the completion of the AED1.13 billion ($308 million) debt buyout by Shuaa Capital earlier this year.
Representing the first key milestones on its path to growth, the company has secured new bank financing of $45 million from National Bank of Fujairah (NBF), as well as appointed a new Board of Directors who bring significant expertise to help guide its growth.
The NBF financing is structured as a bilateral facility for a period of approximately five years. The financing will be used to support SMG’s expansion opportunities arising in the offshore support vessel sector as well as to optimise SMG’s capital structure. The new financing reflects both the strength of SMG’s relationship with NBF and the bank’s confidence in SMG’s prospects and management’s ability to execute on these – underpinned by NBF’s in-depth knowledge in the offshore support vessel sector, which is one of the bank's focus areas.
Vince Cook, CEO of National Bank of Fujairah, said: “As the lender of choice in the marine and offshore support vessel sector, NBF has been associated with SMG for over 20 years. We understand SMG's business model and recognise the company's potential to support the UAE's ambitions to become a shipping hub in the region. This transaction is a testament to the strong relationship we have with both SMG and Shuaa and aligns with our strong focus on the shipping and offshore support vessel sector. We will continue to extend our sector expertise, beyond financing requirements, to support SMG’s ambitious growth plans as well as support the wider economic recovery efforts across the UAE.”
Meanwhile, as part of SMG’s emphasis on enhanced corporate governance, the company has appointed a new Board of Directors, led by Saeed Al Hajeri as Chairman, together with Dr Saleh Al Hashemi, Oliver E. Zoeger and Ajit Joshi. Al Hajeri is currently Vice-Chairman of Abu Dhabi National Energy Company PJSC (TAQA), Vice-Chairman of Islamic Arab Insurance Company (Salama) and an Executive Director at Abu Dhabi Investment Authority (ADIA), having previously held a wide range of Board directorships and senior management positions particularly in international finance. In addition, each of the Directors brings a wealth of expertise in business development, financing and corporate governance which will support SMG’s revitalised business as it seeks to execute on its growth ambitions.
Al Hajeri commented: “Stanford Marine Group has undergone a significant restructuring and I am delighted to be joining the Board to lead the next phase in the company’s development. As a leader in the offshore support vessel sector, SMG is well placed to benefit from the opportunities for growth in the region and I look forward to helping the management deliver on SMG’s full potential.”
Commenting on these developments, Elias Nassif, Founder and Group CEO of SMG, said: "Having secured our financial future with the debt buyout completed with Shuaa earlier this year, we are now looking ahead and focusing on our revitalised growth potential. The financing from NBF will be instrumental in expanding our operations in the region and enhancing our service offerings, as well as further strengthening our capital structure. The fact that we have access to this new financing, despite the economic challenges, is a reflection of our strong positioning in the marketplace. We are also confident that the new Board will be able to accentuate the growth of SMG, deliver value creation opportunities for our stakeholders and ultimately help us to achieve our growth ambitions."
In January 2021, Shuaa successfully completed a discounted debt buyout of Stanford Marine Group's AED1.13 billion debt, resulting in a successful outcome for all parties involved, including the participating banks. The restructuring strengthened SMG's liquidity position and helped SMG's lenders exit with a cash recovery. Following the debt buyout, SMG was significantly deleveraged with a strong balance sheet and a right-sized business poised for growth.
The restructuring transaction also helped retain more than 1,800 jobs and nearly $20 million worth of annual exports of vessels (Made in UAE) manufactured at the state-of-the-art Grandweld shipyard's facility in Dubai Maritime City. -- TradeArabia News Service